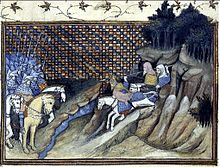 2‭ ‬January 1417: The death of Art Mac Murrough Cavanagh ('King of Leinster') on this day.

Art,‭ ‬the son of Art, son of Murtough, son of Maurice, Lord of Leinster, a man who had defended his own province against the English and Irish from his sixteenth to his sixtieth year; a man full of hospitality, knowledge, and chivalry; a man full of prosperity and royalty; the enricher of churches and monasteries, by his alms and offerings, died (after having been forty-two years in the lordship of Leinster) a week after Christmas.
Some assert that it was of a poisonous drink which a woman gave to him,‭ ‬and to O'Doran, Chief Brehon of Leinster, at Ros-Mic-Triuin [New Ross], that both died. Donough, his son, assumed his place after him.
Annals of the Four Masters 1417 AD

Art McMurrough Cavanagh was a formidable character in his day.‭ He ‬was born in the year 1357. From an early age he was distinguished by his great hospitality,‭ ‬intelligence and bravery, and I should imagine his contemporaries recognised a certain level of guile in the young Art that would serve him well in his dealings with rivals both internal and external. About the year‭ ‬1375 while he was still under age he was elected successor to his father, according to the annalists, who record his death in 1417, 'after being forty-two years in the government of Leinster.' A traditional Gaelic Leader he married a Lady from the Pale named Elizabeth and so through marriage, inheritance and conquest he dominated large tracts of Wexford, Wicklow, Kildare and Carlow.‭ ‬The Palesmen paid him tribute to keep him sweet and of course in the Gaelic areas he ruled in the old way.

However he did suffer a severe reverse in‭ 1392 when the Earl of Ormond defeated him at Tiscoffin and killed 600 of his best warriors. But Art McMurrough pulled of a great coup when he captured the Colonial town of New Ross.

‭In 1395 he had to contend with a descent on Ireland by the King of England, the hapless Richard II, who brought a huge army with him to overawe the Irish Kings and Chieftains. Though his lands in Carlow were invaded and his warriors defeated the English King could not however get Art to ‘come into his House’ and submit. Instead he gave a promise of safe passage to the Leinsterman to come up to Dublin and treat with him. Though wary, Art accepted the invitation and was imprisoned and could only get his freedom by promising to agree to Richard’s terms. Once free though he resumed his independent way of life and soon fell to harrying the invaders once more.

In the summer of‭ 1398 his allies the O’Byrnes defeated and slew Roger Mortimer, the Earl of March, ‬a potential heir to the Throne of England. This political earthquake brought Richard II back to Ireland in the following year,‭ ‬bent on re establishing English Rule on this island.

But his campaign here was a fiasco,‭ ‬with not even a series of nominal submissions to flaunt at Court when he returned home.‭ ‬Indeed while he was bogged down here news reached him that Henry of Bolingbroke had landed in England to claim the throne for himself.‭ ‬This he did and when Richard went back he was taken prisoner and then probably starved to death by the now King of England Henry IV.‭ ‬Thus Art McMurrough Cavanagh was the‭ ‬catalyst for one of the most momentous events in England’s history.