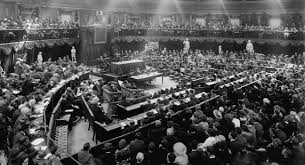 21‭ ‬January‭ ‬1919: The Declaration of Irish Independence on this day. The first meeting of Dáil Éireann was held in Dublin to bring together all the T.D.s still at liberty to attend. Assembling in the Round Room of the Mansion House, those members elected the previous month in the General Election and not held prisoners by the British or on the run unanimously voted in favour of the Independence of Ireland. Of the‭ 73 Sinn Féin MPs elected only 27 TDs present, 36 were “Fé ghlas an Gallaibh” (prisoner of the Foreigner) including Eamon De Valera and Arthur Griffith.
The Declaration was as follows:
''Whereas the Irish people is by right a free people:‭ ‬And Whereas for seven hundred years the Irish people has never ceased to repudiate and has repeatedly protested in arms against foreign usurpation: And Whereas English rule in this country is, and always has been, based upon force and fraud and maintained by military occupation against the declared will of the people: And Whereas the Irish Republic was proclaimed in Dublin on Easter Monday, 1916, by the Irish Republican Army acting on behalf of the Irish people: And Whereas the Irish people is resolved to secure and maintain its complete independence in order to promote the common weal, to re-establish justice, to provide for future defence, to insure peace at home and goodwill with all nations and to constitute a national polity based upon the people's will with equal right and equal opportunity for every citizen.
And Whereas at the threshold of a new era in history the Irish electorate has in the General Election of December,‭ 1918, ‬seized the first occasion to declare by an overwhelming majority its firm allegiance to the Irish Republic: Now, therefore, we, the elected Representatives of the ancient Irish people in National Parliament assembled, do, in the name of the Irish nation, ratify the establishment of the Irish Republic and pledge ourselves and our people to make this declaration effective by every means at our command: We ordain that the elected Representatives of the Irish people alone have power to make laws binding on the people of Ireland, and that the Irish Parliament is the only Parliament to which that people will give its allegiance: We solemnly declare foreign government in Ireland to be an invasion of our national right which we will never tolerate, and we demand the evacuation of our country by the English Garrison.
We claim for our national independence the recognition and support of every free nation in the world,‭ and we proclaim that independence to be a condition precedent to international peace hereafter: In the name of the Irish people we humbly commit our destiny to Almighty God who gave our fathers the courage and determination to persevere through long centuries of a ruthless tyranny, and strong in the justice of the cause which they have handed down to us, we ask His divine blessing on this the last stage of the struggle we have pledged ourselves to carry through to Freedom.‬''

A‭ ‬Ministry pro tempore [Temporary Cabinet] was then selected to run the Country for the time being and attempt to bring effect to the Independence of Ireland so proclaimed:
Cathal Brugha was the First President,‭ ‬Professor Eoin MacNeill was Minister of Finance,‭ ‬Michael Collins of Home Affairs, George Noble Count Plunkett of Foreign Affairs and Richard Mulcahy  in charge of National Defence.