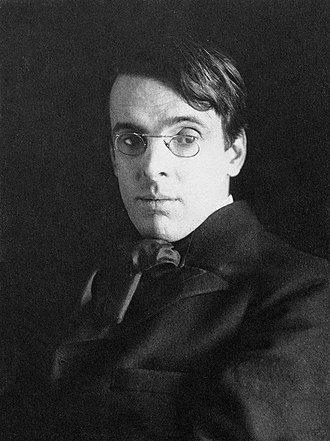 28 January 1939:  The death of William Butler Yeats on this day. He died at Roquebrune-Cap-Martin, in the south of France.  He was Ireland’s most distinguished poet and playwright of the 20th Century. Yeats’ works drew heavily on Irish mythology and history. He never fully embraced his Protestant past or the Catholic Religion but he devoted much of his life to study in numerous subjects including theosophy,  mysticism, spiritualism, and the Kabala.
He was born on  13 of June 1865 in Sandymount in County Dublin, Ireland.  His father was John Butler Yeats, a well known portrait painter and his mother was Susan Mary Pollexfen who was the daughter of a wealthy family from County Sligo. In 1884 Yeats enrolled in the Metropolitan School of Art in Dublin during which some of his first poems were printed in the Dublin University Review. He afterwards moved to London where his father was based though he was often homesick for Ireland. Though he visited Sligo almost every summer. He spent time in the British Museum of Natural History doing research for such collaborations as  Fairy and Folk Tales of the Irish Peasantry ( 1888), Irish Fairy Tales (1892) , and A Book of Irish Verse (1895).
In 1894 Yeats met Lady Augusta Gregory of Coole Park and he became involved with The Irish Literary Theatre, which became the Abbey Theatre. One of the first plays to be performed there was Yeats’  Cathleen ni Houlihan, with Maud Gonne in the title role. The Abbey Theatre opened in December of 1904  and became the flagship for leading Irish playwrights and actors. Yeats’ On Baile’s Strand was one of its first productions. Of his many dramatic and successful works to follow,  The Countess Cathleen (1892),  The Land of Heart’s Desire (1894) and The King’s Threshold (1904) are among his best known.
As a successful poet and playwright, in 1903 Yeats went on a lecture tour of the United States, and again in 1914, 1920, and 1932. Yeats and his sisters started the Cuala Press in 1904, which would print over seventy titles. At the age of forty-six, Yeats met Georgie (George) Hyde Lees  (1892-1968) and they married on the 20 October, 1917. They had two children Anne (born 1919 ) and Michael who was born in 1921.
In 1916 the Easter Rising occurred in Dublin, and some of Yeats’ s friends participated in it. This prompted his poem Easter  (Sept. 1916). In this year the first volume of Yeats’ autobiography Reveries over Childhood and Youth was published, with the second following in 1922 titled The Trembling of the Veil. In 1917 Yeats bought a Norman tower near Coole Park in Galway for his summer home.  The Wild Swans at Coole was then published in 1919.
In 1922 Yeats received an Honorary degree from Trinity College,  Dublin. He was elected to the Irish Free State Senate in the same year, and he served for six years before resigning due to failing health. In December of  1923  he established his International reputation when he was awarded the prestigious Nobel Prize for Literature. He continued to work on his essays, poetry and the poetry anthology Oxford Book of Modern Verse 1892-1935. . As well as Coole Park he also spent time in his home ‘Riversdale’ at Rathfarnham, Dublin but also spent a number of winters abroad.
When he died in France at the age of 73  he was first buried there, but in 1948, in accordance with his wishes he was re-interred “under bare Ben Bulben’s head” in Drumcliff churchyard,  County Sligo. His epitaph reads:

Cast a cold eye
On life, on death.
Horseman, pass by.