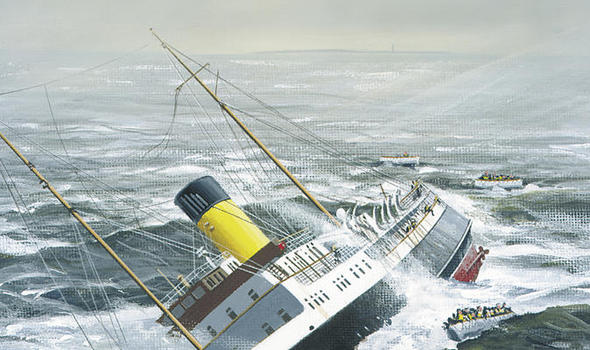 31 January 1953: The Loss of the Princess Victoria. 126 people were drowned when the car ferry of that name sank while making it’s way from Stranraer to Larne. In one of the worst gales in living memory in these islands the ship went down when heavy seas caused the stern car deck doors to buckle and break open. Water then flooded into the ship causing her to capsize. Among the passengers who perished were Stormont’s Finance Minister and Deputy Prime Minister Major J M Sinclair, and Sir Walter Smiles, the Ulster Unionist MP for North Down.
Captained by the 55 year old James Ferguson, the vessel left Stranraer's railway loading pier at 07:45 AM with 44 tons of cargo, 128 passengers and 51 crew. Captain Ferguson had served as master on various ferries on the same route for 17 years. A gale warning was in force but he made the decision to put to sea.
There were 44 survivors, notably none of the women and children on board were rescued but neither were any the ship's officers either incl Captain Ferguson. Eyewitnesses reported seeing a lifeboat containing at least some of the women and children being smashed against the side of the Princess Victoria by the huge waves. The disaster shocked many people because, although it took place in extreme weather conditions, it involved a routine journey, on a relatively short crossing (20 miles) in what were believed to be safe waters.
The ship had sent out distress signals in Morse code but due to the listing of the vessel continually gave wrong readings as to its actual location. The winds were terrific and visibility very poor in great storm that caused havoc across north west Europe that day. As a result ships sent to assist in the rescue failed to spot her as she sank and perhaps lives that could have been saved were thus lost. No aircraft was available to help locate her either.
The Court of Enquiry into the sinking, held in March 1953 at Crumlin Road Courthouse in Belfast found that the Princess Victoria was lost due to a combination of factors. In a report of 30,000 pages the enquiry found that: firstly, the stern doors were not sufficiently robust.
Secondly, arrangements for clearing water from the car deck were inadequate. The report concluded "If the Princess Victoria had been as staunch as those who manned her, then all would have been well and the disaster averted."
In summary it found that the loss of the M V 'Princess Victoria' was caused or contributed to by the default of the owners and the manager in that they were negligent before the disaster:
a) In failing to appreciate that the vessel was unfit to encounter the full range of foreseeable weather conditions on the Larne and Stranraer route by reason of the inabilit6y of the stern doors to withstand heavy seas.
b) In not taking appropriate steps to provide adequate freeing arrangements on the car deck or else to make the stern doors sufficiently strong and adequate to prevent heavy seas from flooding that deck.