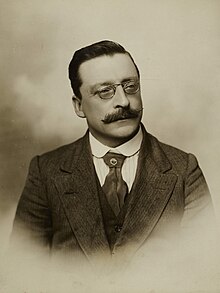 12‭ August 1922: The death of Arthur Griffith in Dublin on this day. He was the Leader of the Provisional Government of the Irish Free State. He was born in the city in 1872 and followed his father into the printing trade and from that developed an interest in Journalism. He was a strong Nationalist with a conservative streak.  His interest in Irish nationalism was reflected in his membership of the Irish Republican Brotherhood (IRB) and the Gaelic League. He went out to South Africa in 1896 and spent a couple of years there where he witnessed the attempts of British Imperialism to dominate the Boer Republics. He returned home and in 1900, he founded Cumann na nGaedheal, a cultural and education association aimed at the reversal of Anglicisation.

In‭ ‬1905 he founded the Sinn Fein Party as an advanced Nationalist movement that wanted to see Ireland an Independent Country. He was inspired by the settlement reached between Austria and Hungary that resulted in separate political institutions under the Austrian Crown. He proposed that a similar arrangement would be a good solution for Britain and Ireland to follow. His Party was not a great success but not a failure either and it gathered under one banner different strands of Nationalist sentiment that felt that ‘Home Rule’ was not enough.

It was in the aftermath of the Easter‭ 1916 Rising, dubbed by the British ‘The Sinn Fein Rebellion’ that Griffith became a serious player in Revolutionary Politics. Sinn Fein soon mushroomed in size as more radical elements than he were drawn by default towards the Party. In the General Election of 1918 Sinn Fein swept the boards but when the Dáil met in 1919 it was Eamon de Valera who was elected the President and Arthur Griffith was made the Vice President! Griffiths’ role in the War for Independence was entirely political and he helped to undermine British rule by organising a shadow local government structure. This while patchy was a direct challenge to the Crown’s ability to enforce its own system upon the Irish and helped to contradict the notion that the Irish could not run their own affairs.

However it was only after the Truce of‭ ‬1921 when De Valera chose him to lead the Peace Delegation to London to negotiate directly with the British Government that a rift began to appear. This was between the conflicting approaches to striking a deal with the British. Griffith was eventually persuaded to accept Dominion Status for the 26 Counties and convinced the other plenipotentiaries to sign ‘the Treaty’ as well. He saw it as the best deal that could be obtained from the British at that time.

But when he returned home it was clear that De Valera‭ & ‬a considerable number of his Party colleagues felt that the Delegation had overstepped the mark by not referring the Treaty back to Dublin for full Cabinet consideration before signing.  After a mammoth series of debates aka the ‘Treaty Debates’ the Sinn Fein Party split and De Valera resigned the Presidency of the Dáil and led his followers out.

The remaining TDs decided to elect Griffith to lead the Provisional Government of the Irish Free State.‭ While he now had a political position of some power Griffith was in many respects a figurehead and more dynamic and calculating members of his rump Party did a lot of the running of the new dispensation. The outbreak of the Civil War in June 1922 further weakened his hold and the strain of the past few months began to take its toll.  Exhausted by his labours, he died of a brain haemorrhage in Dublin on the 12 August 1922 and was buried in Glasnevin Cemetery Dublin.