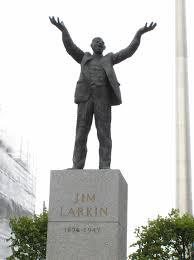 It was a clash between the forces of Capital and Labour on the streets of Dublin that was to enter into the folklore of Dublin’s working class. Basically the workers in certain companies wished to exercise the right to be a member of a Union of their own choosing. The Employers in return were prepared to accept that – so long as it was not the Irish Transport & General Workers Union (ITGW)!

Matters between Murphy and the ITGWU came to a head in the summer of 1913. Murphy refused to employ ITGWU members on the staff of his Irish Independent newspapers and in July 1913, he forbade staff in the Tramways Company to join the Union. On Saturday, 27 July 1913 Murphy called a meeting of his employees in the Tramways Company. He warned his workers of the consequences of strike:

'I want you to clearly understand that the directors of this company have not the slightest objection to the men forming a legitimate Union. And I would think there is talent enough amongst the men in the service to form a Union of their own, without allying themselves to a disreputable organisation, and placing themselves under the feet of an unscrupulous man who claims the right to give you the word of command and issue his orders to you and to use you as tools to make him the labour dictator of Dublin. ... I am here to tell you that this word of command will never be given, and if it is, that it will be the Waterloo of Mr. Larkin.'

The following month, on 21 August, about 100 employees in the Tramways Company received a dismissal notice:

‘As the Directors of the Tramways Company understand that you are a member of the ITGWU whose methods are disorganising the trade and business of the city, they do not further require your service’.

''This was a direct challenge to the ITGWU. There could only be one reply to Murphy. He and his fellow directors had started a lockout: the workers could only respond with a total withdrawal of labour. Larkin carefully chose the moment to strike in order to cause the maximum impact. Shortly after 10.00 a.m. on Tuesday, 26 August 1913—the first day of the Dublin Horse Show, one of the city’s busiest events—drivers and conductors stopped their trams and abandoned them in protest. About 700 of the 1,700 Tramways Company’s employees went on strike. The city was filled with tension on the days following. Strikers resented the workers who continued to operate the trams, and fights often took place between them. Workers who usually distributed the Irish Independent—[owned by Murphy] though not employed by Murphy—refused to handle it in protest. Messrs. Eason and Co., the large city newsagents, were asked by Larkin not to sell the paper. They refused. As a result dock-workers at Kingstown (Dún Laoghaire) refused to handle any Eason and Co. goods from England or addressed to England.