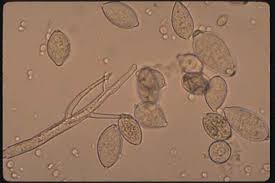 20 August 1845: Phytophthora infestans, a fungal infection that rots the tubers of potatoes, was recorded in Ireland on this day. David Moore, curator of the Botanic Gardens in Dublin noted that leaves of some of the potato plants in the institution were showing signs of blight. His was the first known scientific observation in Ireland of this fungus.

Phytophthora infestans (pronounced fy-TOF-thor-uh in-FEST-ans) is a rather common pathogen of potatoes wherever they are grown, but it is usually not a problem unless the weather is unusually cool and wet. Water is necessary for the spores to swim in to infect the leaves of the potatoes; the tubers and roots of the potato are more resistant to the pathogen. The name, meaning "infesting plant destroyer" is especially appropriate, because under the right conditions and with the correct susceptibility genes in the host, Phytophthora can kill off a field of potatoes in just a few days!

The Peasantry of Ireland, which covered the bulk of the population within that description were basically destitute of any independent means of existence. They relied for sustenance almost entirely on the crops of potatoes to maintain their physical well being. When the crop was plentiful this could be done but in the years when it failed then Disaster loomed.

I conceive the Peasantry of Ireland to be, in general, in the lowest possible state of existence. Their cabins are in a most miserable condition and their food potatoes, with water, without even salt.

Mr Nimmo a witness to the Select Committee of 1825.

From such mundane sequences in the life of a fungi did the fate of a People hang in the late summer of 1845. Within weeks the Blight had swept the land and millions of Irish men women and children knew that at least a year of hardship lay ahead of them. In fact the Blight was to come back each year until 1849 and in its wake leave at least a Million dead from starvation and disease and another Million forced to flee their Homeland.