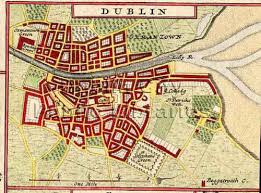 2 August 1649: The Battle of Rathmines/Ráth Maonais on this day. The battle was fought in what was then open fields to the south of Dublin City and what is now long since suburbia. The city itself was under siege by James Butler, Marquis of Ormond, in command of the Royal Army that gave its allegiance to the uncrowned King Charles II, the son of the recently executed King Charles I.

Ormond hoped to force the city garrison of the English Parliament under Colonel Jones to capitulate before Oliver Cromwell could sail from Britain with a large relief army to retake Ireland from the Catholics. However it was Ormond himself who had handed the city over to the parliamentary forces some years beforehand when he realised he could no longer defend it from the Catholics. His logic was 'better English rebels than Irish ones’!

In the wake of the collapse of the Royal Army in England and the capture and execution of King Charles I the remnants of his forces in Ireland formed a reluctant alliance with the Catholic forces here to oppose the Parliamentarians. Thus the army besieging the city under Ormond was a disparate one of divided loyalties, their only point of unity was a hatred of the English Parliament and its armed forces. The Irish Catholics especially those from drawn from the ranks of Gaelic Ireland did not trust Ormond and indeed his inept conduct on the day of the battle led to questions being asked - though nothing was ever proven.

The battle began when Ormond ordered an advance force to seize the partially demolished Baggotrath Castle, [ lower right side of map] situated roughly just south of where Baggot street bridge now is on the Grand Canal. However the force lost its way in the dark and Colonel Jones must have got wind of the venture and launched a counter attack that caught the would be attackers off guard. Disorder turned to rout and Jones seized his moment and called out his strike force to pursue and kill or capture as many of their opponents as they could. Ormond had already retired to his Camp at Rathmines when word reached him that Jones had come out to fight.

‘Meanwhile, Colonel Jones had observed the movement around Baggotrath and guessed Ormond's intention. He quickly deployed 4,000 foot and 1,200 horse from the Dublin garrison on the meadows between the city walls and Baggotrath, intending to dispute Ormond's occupation of the castle. Ormond gave orders that his whole army should stand to arms to support Purcell and Vaughan at Baggotrath in case of a Parliamentarian attack. Having been awake all night, Ormond then retired to his tent at Rathmines to rest while his army deployed, but he had underestimated Colonel Jones' determination.

At about nine o'clock in the morning, Jones' whole force advanced rapidly across the meadows towards Baggotrath. Sir William Vaughan's cavalry were routed in the first charge and Vaughan himself was killed. Major-General Purcell's infantry held the position for a short time but were soon overwhelmed; most were killed or taken prisoner, the rest fled. Having regained Baggotrath, Jones saw an opportunity to attack the main Royalist camp. He quickly regrouped and advanced towards Rathmines. Ormond was awakened by the sound of gunfire and rode to the battle, where he bravely tried to rally the troops that were streaming back from Baggotrath.

Any remaining Royalist troops fled as the Parliamentarians overran the camp at Rathmines. Ormond retreated south with his lifeguard and made his way to Kilkenny.

Estimates of the number of coalition soldiers killed at Rathmines vary between 600 and 4,000. More than 2,500 were taken prisoner, including many experienced officers. Ormond's artillery and baggage train were captured, as well as his private papers and correspondence.’
http://bcw-project.org/military/confederate-war/rathmines

Colonel Jones had won a great victory and when Cromwell arrived some weeks later with 14,000 men he was quickly able to seize the initiative without having to secure Dublin first.

The battle gave the names to several local landmarks. 'The Bleeding Horse' public house, which stands at the corner of modern Upper Camden street, was established in 1649, when, after the Battle of Rathmines, a wounded horse wandered into a tavern. This made such an impression on the owner that he named his premises 'The Bleeding Horse'.

In addition, an area in the townland of Milltown was formerly known as the "Bloody Fields", where it is believed that some of the fleeing Royalist soldiers were overtaken by the Parliamentarian cavalry, killed and subsequently buried

Ironic that Jones died of a fever some months later when on campaign in County Waterford, more or less a forgotten man while Ormond went on to be the Lord Lieutenant of Ireland under King Charles II and is buried in Westminster Abbey!