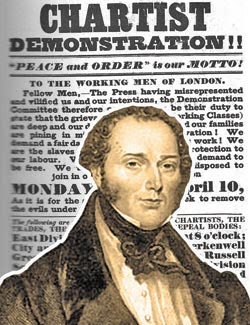 30 August 1855: The Death of Feargus Edward O'Connor , Chartist Leader on this day. He was the son of Roger O'Connor, a United Irishman, and was born in 1796 in County Cork. When Feargus O'Connor was twenty-four he inherited an estate there. Although a Protestant, O'Connor was a reforming landlord and denounced the religious Tithes & the power of the Established Church. Daniel O’Connell soon spotted his potential and secured a candidacy for him in the General Election of 1832 in which he was returned as an MP for County Cork. But O’Connor rashly decided to try and unseat the Great Dan as Leader of the Irish MPs in the House of Commons and the two fell out.

O’Connor thereafter focused his attentions on Radical English Politics, moving to Manchester where he published the highly successful Northern Star newspaper. He became a leading light in the Chartist Movement, dedicated to Universal Suffrage and Annual parliaments. Here again though his maverick personality and impatience with pacific political activity led him into trouble with him advocating the threat of violence to achieve political Reform. O'Connor responded to criticism by forming a new Chartist organisation, the East London Democratic Association.

He was found guilty of sedition in 1839 and sentenced to eighteen months imprisonment. O'Connor continued to edit the Northern Star newspaper from his prison cell and upset the other Chartist leaders when he told his readers that from "September 1835 to February 1839 I led you single-handed and alone."

In 1845 O'Connor launched his Chartist Land Plan. His objective was to raise money to buy a large estate that would be divided into plots of three and four acres. Subscribers would then draw lots and the winners would obtain a cottage and some land. O'Connor promised that his Land Scheme would "change the whole face of society in twelve months" and would "make a paradise of England in less than five years".

But the scheme backfired and the estate went bankrupt before too long. Some of the tenants ended up being evicted and the whole disastrous enterprise badly damaged O’Connor’s credibility with the English Working Class. The stress and effort involved took its toll on O’Connor’s mental health. In 1847, O'Connor was elected MP for Nottingham, becoming the first and only Chartist MP.

His finest moment should have been the Great Demonstration he organised to assemble in Kensington London in 10 April 1848 that was to march on the Houses of Parliament. 200,000 people were expected to attend and this projected assembly put the wind up the British Establishment. The Duke of Wellington was put in charge of the Military and tens of thousands of citizens were made temporary 'policemen' to control the situation.

In the event it proved a damp squib as only about 25,000 people turned up in a heavy downpour to hear O’Connor make outlandish claims that proved to be untrue- namely that over five million people had signed his Petition on workers rights when it was really about two million. Even then on examination it was discovered that many were clearly forgeries including those of the Queen and the Iron Duke, who appeared to have endorsed the petition no fewer than seventeen times! It was all over by 2 O'clock that afternoon and the Establishment could breath again.

After 1848 Chartism went into sharp decline. From 1851, O'Connor's behaviour became increasingly irrational, possibly as a result of syphilis. In 1852 he was declared insane and sent to an asylum in Chiswick. He died on 30 August 1855.

A charismatic and talented actor on the stage of politics O’Connor at his best was a man to be watched. He claimed Royal descent from the last King of Ireland - Rory O’Connor of Connacht. He always supported the Repeal of the Union even though it must have cost him support amongst the English People. He was though dogged by personal problems and sometimes allowed his temperament to get the better of him. But whatever his faults he helped to raise the English Working Class up out of their misery enough to know that together and organised they could challenge the Establishment to at least listen to their demands to be treated fairly and with Justice.