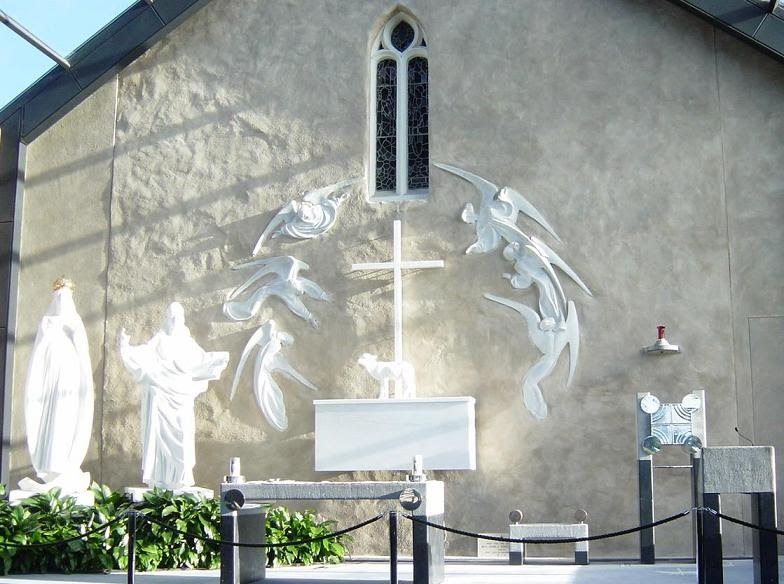 21‭ August 1879: The Apparition of Knock on this day. A number of witnesses of various ages reported that they had seen the Virgin Mary, St Joseph and St John the Evangelist appear on the wall of Knock Church. As a result Knock became a major centre of Pilgrimage.
On a wet Thursday evening,‭ ‬21st August 1879, at about 8 o'clock, a heavenly vision appeared at the south gable of the Church of St. John the Baptist in Knock, Co. Mayo. Fifteen people - men, women and children - ranging in age from six years to seventy-five, watched the Apparition in pouring rain for two hours, reciting the rosary. Though they themselves were soaked, no rain fell in the direction of the church gable, where the ground remained perfectly dry.
Our Lady wore a large white cloak,‭ ‬fastened at the neck. Her hands and eyes were raised towards heaven, in a posture of prayer. On her head was a brilliant crown and where the crown fitted the brow, was a beautiful rose. On her right was St Joseph, head bowed and turned slightly towards her as if paying her his respects. He wore white robes. On our Lady's left was St John the Evangelist, dressed as a bishop, with a book in his left hand and right hand raised as if preaching. His robes were also white. Beside the figures and a little to the right in the centre of the gable was a large plain altar. On the altar stood a lamb, facing the West and behind the lamb a large cross stood upright. Angels hovered around the lamb for the duration of the Apparition.
http://www.knock-shrine.com/apparition_at_knock.htm
Most Rev.‭ ‬Dr. John MacHale, Archbishop of Tuam, only six weeks after the Apparition, set up a Commission of Enquiry. Fifteen witnesses were examined and the Commission reported that the testimony of all taken as a whole, were trustworthy and satisfactory.
There was a‭ 2nd Commission of enquiry in 1936 when, Mary Byrne, one of the last surviving witnesses, was interviewed.
The commissioners interviewed her in her bedroom,‭ ‬as she was too ill to leave. She gave her final testimony and concluded with the words:
'I am clear about everything I have said and I make this statement knowing I am going before my God‭'‬
She died six weeks later.
Posted by Columba Iona at 06:30