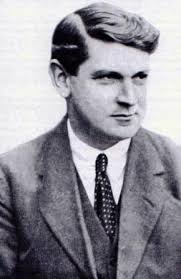 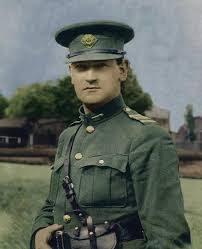 22 August 1922: General Michael Collins was shot dead on this day. He was killed in an ambush at Béal na mBláth (Mouth of the Flowers) near Macroom in Co. Cork by a party of the local anti Treaty IRA.

Michael Collins had been the main driving force within the IRA that had helped to fight the War of Independence against the British Crown Forces in 1919-1921. It was a ‘War of the Shadows’ in which Collins wore no uniform but stayed in Mufti. But he had been one of the signatories of a Treaty with the British in December 1921 that had split the IRA into pro and anti Treaty camps. By the Summer of 1922 he thus found himself leading a new war against many of his old comrades in arms, dressed as the General in Chief of the new National Army of the emerging Irish Free State.

He was in his native Cork to inspect the local military forces. He travelled out to White’s Hotel (now Munster Arms) in Bandon on 22 August 1922. On the road to Bandon, at the village of Béal na mBláth Collins’ column stopped to ask directions. However the man whom they asked, Dinny Long, was also a member of the local Anti-Treaty IRA. An ambush was then prepared for the convoy when it made its return journey back to Cork city. They knew Collins would return by the same route as the two other roads from Bandon to Cork had been rendered impassable by Republicans.

The ambush party, allegedly commanded by Liam Deasy, had mostly dispersed by 8:00 p.m. as they had given up any hope of an ambush so late in the day. So when Collins and his men returned through Béal na mBlath there was just a rear-guard left on the scene to open fire on Collins’ convoy. The ambushers had laid a mine on the scene, however they had disconnected it and were in the process of removing it by the time the Collins convoy came into view.

Collins was killed in the subsequent gun battle, which lasted approximately 20 minutes, from 8:00 p.m. to 8:20 p.m. He was the only fatality in the action. He had ordered his convoy to stop and return fire, instead of choosing the safer option of driving on in his touring car or transferring to the safety of the accompanying armoured car, as his companion, Emmet Dalton, had wished. It is said that when the first shots were fired at the convoy, Emmet Dalton had ordered the driver to "drive like hell" out of the ambush. Collins himself countermanded the order and said "Stop! We'll fight them". He was killed while exchanging rifle fire with the ambushers. Under the cover of the armoured car, Collins’ body was loaded into the touring car and driven back to Cork. Collins was 31 years old.

There is no consensus as to who fired the fatal shot. The most recent authoritative account suggests that the shot was fired by Denis (”Sonny”) O’Neill, an Anti-Treaty IRA fighter and a former British Army marksman who died in 1950. He later emigrated to the USA. This is supported by eyewitness accounts of the participants in the ambush. The general consensus at that time was it was a ricochet that took him out but that has been challenged in recent years.

Collins’ men brought his body back to Cork where it was then shipped to Dublin for a State funeral. His body lay in state for three days in Dublin City Hall where tens of thousands of mourners filed past his coffin to pay their respects. His funeral mass took place at Dublin’s Pro Cathedral where there was a large military and civilian presence. He is buried in Glasnevin Cemetery Dublin.