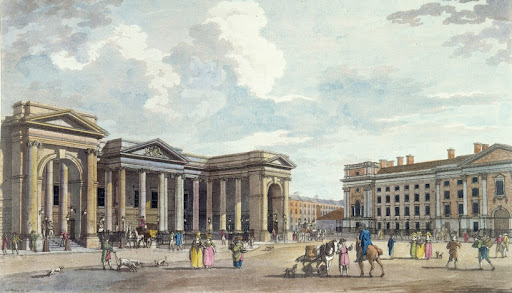 2‭ August ‬1800: The ‘Irish’ Parliament on College Green in Dublin met for the last time on this day. It had been persuaded to vote itself out of existence through an Act of Union with Great Britain. Many wealthy landlords and members of the Irish aristocracy were moved by promises of titles and honours from London. With the Act of Union the centre of political power shifted to that City.

The idea of a union of Great Britain and Ireland had been considered many times over the previous‭ 100 years or so. The grant of nominal legislative independence to the Dublin Parliament in 1782 gave the impression to many that the idea had been dropped.

However,‭ the situation changed in 1793 with the onset of War with Revolutionary France and even more so with the 1798 Rising here in Ireland which was brutally crushed. The Ascendancy (that is the Anglo-Irish Elite) had been shaken to its core by the events of the previous years and realised that if Catholic Emancipation were granted their situation would be fatally undermined. If Catholics gained the right to sit in Ireland’s parliament then it was only a matter of time until the Ascendency was finished as a political & economic power in the land. They were therefore amenable to be persuaded that the centre of power should reside in London thus by negating the possibility of the Catholics of Ireland gaining control of the Country’s Destiny.

Pitt,‭ the British Prime Minister along with Lord Castlereagh went for sheer bribery to ‘buy’ the MPs consent to a Union. The going rate was ‬£15,000 per seat and threats, bribes and promises were applied to swing the Honourable Members consent to the measure. Castlereagh stated that his task was to:  ‘to buy out, and secure to the Crown forever, the fee simple of Irish corruption’.

Both houses of the College Green Parliament agreed the terms of the Union on‭ 28 March 1800. An identical Bill was laid before the both the Dublin and London Parliaments. The British one became law on 2 July and the Royal Assent was given to an Act of Union on 1 August. This Act of Union became operative on 1 January 1801.

Had there been a stable peace at home in Ireland and abroad,‭ and no possibility of a further French attack & with no threat of Catholic Emancipation then it is very unlikely that the Dublin Parliament would have voted itself out of existence. Ironically Peace with France came, however briefly, in the year following the Union (1802) and the Catholics of Ireland had to wait another 28 years to their Emancipation from last of the Penal Laws.

The imposing parliament building still stands in College Green Dublin [above] but is now a branch of the Bank of Ireland.