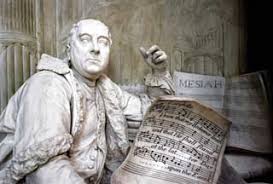 13 April 1742: George Frederic Handel conducted the first performance of his Messiah, in the New Music Hall, Fishamble Street, Dublin on this day.

In the late summer of the year 1741 the Duke of Devonshire, the Viceroy of Ireland, invited Handel to Dublin. Moreover, the Governors of Mercer's Hospital, and of the Charitable Infirmary, had asked Handel to compose something special in aid of the Dublin sick. This special work, the immortal Messiah, was finished by Handel on September 14th, 1741, having been written in three weeks--a marvellous tour de force. On November 18th, 1741, Handel arrived in Dublin and spent the Winter in giving performances in the City and working on drafts of Messiah. He took a house in Abbey Street near Liffey Street where he received visitors.

Handel's first concert was on December 23rd, consisting of L'Allegro, with two concertos for several instruments, and a concerto on the organ. But it had become known that Handel was planning something special to mark his Season in Dublin and expectation grew that it would be a musical event of great importance. An open air Rehearsal Concert some days prior to the formal opening drew large crowds and was met with open approval.

In apprehension of overcrowding at the performance, posted The Dublin Journal on this day the following notice:

The Stewards of the Charitable Music Society request the Favour of the Ladies not to come with Hoops this Day to the Musick-Hall in Fishamble Street: The Gentlemen are desired to come without their Swords.

In its Edition of 17 April 1742 the publication wrote that:

On Tuesday last Mr. Handel’s Sacred Grand Oratorio, the MESSIAH, was performed at the New Musick-Hall in Fishamble-street; the best Judges have allowed it to be the most finished piece of Musick. Words are wanting to express the exquisite delight it afforded to the admiring, crowded audience. The Sublime, Grand and Tender, adapted to the most elevated, majestick and moving Words conspired to transport and charm the ravished heart and ear. It is but Justice to Mr. Handel that the World should know, he generously gave the money arising from this grand performance, to be equally shared by the Society for relieving Prisoners, the Charitable Infirmary and Mercer’s Hospital...

This great opening Performance was carried out with the help of the choirs from St. Patrick's and Christ Church. The £400 proceeds were given to Mercer's Hospital, the Charitable Infirmary and for the relief of prisoners.

Handel spent the rest of the Summer giving repeat performances of his many works including the Messiah. He also spent some time in the City of Cork. He left Ireland on Friday, August 13th, never to return but his time here marked one of the highest points of his later career as a Musician. He died in London in 1759 and was buried in Westminster Abbey.


Handel is the greatest composer who ever lived.
I would bare my head and kneel at his grave.
Beethoven
Posted by Columba Iona at 11:49