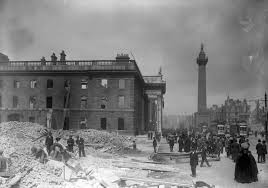 
Sniping had continued overnight as the Rising came to an end. The captured insurgents who were held outside the Rotunda over the night were marched off to Richmond Barracks, Inchicore. Here they were screened and questioned by detectives of the DMP ‘G’ Division under military supervision.


In his Prison Cell Padraig Pearse wrote out a brief note reiterating his instructions of the previous day that was forwarded on to the Republican Garrisons that still held out:
Posted by Columba Iona at 14:45