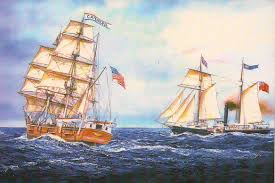 17 April 1876: The whaling vessel Catalpa rescued six Irish prisoners from British Captivity on this day. The ship under Captain George S. Anthony carried out one of the most daring and long distance rescues in history when she was used to spirit away the six Fenian prisoners from Freemantle, Australia. Even though the British quickly realised the men had fled and gave chase the ship could not be boarded as she flew the American flag. The rescued men (Thomas Darragh, Martin Hogan, Michael Harrington, Thomas Hassett, Robert Cranston and James Wilson) were brought safely to New York City. The Fenians John Devoy and John J. Breslin planned the rescue operation from America and Breslin was dispatched to Australia to co-ordinate the rescue.

In July 1874 the Clan na Gael Organisation in the USA decided to rescue the six prisoners who were excluded from a conditional pardon for all civilian Fenian prisoners. These men had been members of the British Army and thus considered outright ‘Traitors’ by the British. John Devoy was assigned to co-ordinate this rescue. He saw that funds were raised and a Captain George S. Anthony was ‘head hunted’ to undertake the dangerous mission. When it was put to him he was willing to take the risk. It was then decided that the voyage must look like a whaling voyage, thus Captain Anthony went looking for a suitable ship. In the port of Boston he found one that suited his needs and purchased the Catalpa, a three-master whaler, for $5200.


The ship set out from New Bedford, Massachusetts, USA, in April 1875. The Voyage was undertaken with the deliberate intention engaging in a daring a yearlong mission of international rescue. On 28 March 1876 the Catalpa arrived off Bunbury Harbour, Western Australia and a meeting was set up between Captain Anthony and John Breslin. At this meeting they agreed the rescue date should be on 6 April. However due to the presence of a British gunboat at the Harbour and the information that another gunboat was due to arrive they rescheduled the rescue for 17 April.


With the help of the prison chaplain, the six men escaped to the coast where Captain Anthony was waiting with a small whaleboat that would take them to the Catalpa. The resistance they overcame, both from armed British vessels and a furious sea storm, made their escape the stuff of legend. The British attempted to capture the Catalpa [above] but Captain Anthony had the Flag of the United States raised and warned the prospective boarders that such a move would be viewed as an Act of War. They thought the better of it and the Catalpa made good her escape.

The Catalpa landed the ‘Freemantle Six’ in New York Harbour on 19 August 1876. Though Captain Anthony would never again put to sea in open waters for fear of arrest by the British, his rescue voyage, made mostly without the use of a functioning chronometer, is one of the greatest feats of seamanship ever recorded in nautical annals.