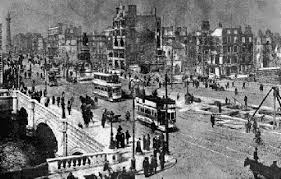 26 April 1916: Field guns from Trinity College and the gunboat Helga on the River Liffey bombarded the Irish Citizen’s Army HQ at Liberty Hall and demolished it. Buildings in O’Connell St were also targeted and destroyed. The upper floor of the GPO was evacuated as the men there came under sustained attack from British snipers and guns.


Wednesday, April 26th, 9.30 a.m. - While we were dressing a terrific bombardment with field guns began - the first we had heard - and gave me cold shivers. The sound seemed to come from the direction of the G.P.O., and we concluded they were bombarding it. It went on for a quarter of an hour - awful! big guns and machine-guns - and then ceased, but we hear they were bombarding Liberty Hall, the headquarters of Larkin and the strikers two years ago, and always a nest of sedition. It is now crammed with Sinn Feiners. The guns were on H.M.S. Helga, that came up the river and smashed it from within about three hundred yards. It made me feel quite sick.


The Battle of Mount Street Bridge: British soldiers from the Sherwood Foresters regiment came under fire from a handful of Republican positions as they approach the Bridge there as they made their way up Northumberland Rd. Despite repeated attempts they were driven back sustaining over 200 casualties.


They were raw troops just off the boat from England. While the Officers and men showed great bravery they were tactically naïve and constantly launched full frontal attacks that cut down scores of them at a time. The defenders of the Bridge put up an equally heroic resistance against overwhelming odds and managed to hold their positions.


Eventually the British troops took Clanwilliam House by storm. Three of the twelve defenders were killed. The Insurgents were men drawn from the garrison at Boland’s Mill under the orders of Commandant Eamon De Valera.

British forces entered O’Connell St. and took up positions to cover the GPO and suppress the garrison within. A concentrated fire was opened on the GHQ of the Rising and the effects began to tell.


I was looking on O' Connell Bridge and Sackville Street, and the house facing me was Kelly's - a red-brick fishing tackle shop, one half of which was on the Quay and the other half in Sackville Street. This house was being bombarded.


I counted the report of six different machine guns, which played on it. Rifles innumerable and from every sort of place were potting its windows, and at intervals of about half a minute the shells from a heavy gun lobbed in through its windows or thumped mightily against its walls.


For three hours that bombardment continued, and the walls stood in a cloud of red dust and smoke. Rifle and machine gun bullets pattered over every inch of it, and unfailingly the heavy gun pounded its shells through the windows."


James Stephens The Insurrection in Dublin