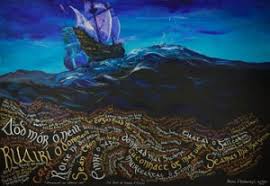 29 April 1608: The entry into Rome of the Earls of Tyrone and Tyrconell on this day. After an epic journey by land and sea that started at Rathmullan on the banks of Lough Swilly in County Donegal, the Earl of Tyrone Aodh O’Neill and the Earl of Tyrconell Ruairi O’Donnell along with their entourage of about 100 followers reached  the City of Rome.


Porta del Populo was the name of the gate by which they entered the city. They went on after that through the principal streets of Rome in great splendour. They did not rest until they reached the great church of San Pietro in Vaticano. They put up their horses there, and entered the church. They worshipped, and went around, as if on a pilgrimage, the seven privileged altars of great merit which are in the church. Afterwards they proceeded to a splendid palace, which his Holiness the Pope had set apart for them in the Borgo Vecchio and in the Borgo Santo Spirito.

The Flight of the Earls by Tadhg Ó Cianáin

They had fled Ireland in fear of their lives as they believed that the English planned to eliminate them. With their flight the old Gaelic Order that had lasted over a thousand years and more finally collapsed. Most of their lands were confiscated and redistributed to those who were loyal to the Crown.


They never saw Ireland again for within a year Ruairi O’Donnell was dead of the fever, and Aodh O’Neill died at an advanced age in the Holy City in 1616. Their remains are still interred in the Church of San Pietro in Montorio on the hill of Janiculum, the traditional site of the Martydom of Saint Peter.