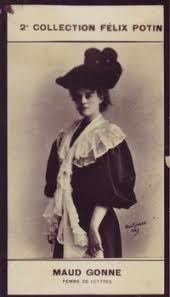 27 April 1953: Maud Gonne McBride died on this day in Dublin City. She was born in England in 1866 and was the eldest daughter of Captain Thomas Gonne of the 17th Lancers and his wife Edith Frith Gonne. Maud’s mother Edith died from tuberculosis when she was 4 years old, and from then on she and her sister Kathleen were mostly reared by governesses. When she was 16 her father was posted to Ireland and the family settled in Kildare.


Following the death of her father, she divided her time between France and Ireland. During this time she met and fell in love with the right wing politician and journalist Lucien Millevoye. She soon became his mistress. They had two children, one of whom died a child. The relationship ended and Maud returned to Ireland. Here she became the centre of attention of WB Yeats but she spurned his proposals of marraige. How intimate they became is a mysterey though.

After the Boer war she married Major John McBride (who had fought with the Boers against the British) and with whom she had a son - Sean McBride, who later was to be an IRA Chief of Staff and then a Cabinet Minister in the Irish Cabinet Minister. They soon split and Maud threw herself into working to secure Ireland’s Freedom from British rule. At 6 foot tall, with masses of auburn hair and fiery eyes, she was considered majestically beautiful and would spend her life fighting tirelessly for the cause of Irish Independence.


She fought evicitions and helped in organizing committes to feed the poorer children of Dublin. Maud was in France during the Easter Rising of April 1916. Her former husband was one of the leaders, and was executed for his involvement. Maud returned to Ireland in 1917, started to use her husband’s name and insisted on wearing black for many years.


Following her release Maud continued her public life. During the War of Independence she was instrumental in publicizing atrocities carried out by the English forces. She worked for the White Cross supplying financial relief to the families of victims of violence.


She was against the Anglo-Irish Treaty of 1921, but as a loyal supporter of Arthur Griffith, who supported the treaty, she remained uncharacteristically quiet on the subject. Following his death in 1922, her position hardened, particularly as she disliked William Cosgrave’s Free State government.


As Civil War broke out in 1922, she founded the Women’s Prisoners’ Defence league with Hanna Sheehy Skeffington and Charlotte Despard “for the help, comfort and release of” Republican prisoners. The organization of “mothers” as Maud called them, was banned a year later. The group also introduced the lily as a symbol of the Rising of Easter 1916. The lily is still used today to remember the rebellion and those that died.


In the years that followed the Civil War, Maud continued to support the Republican side and maintained her efforts on behalf of political prisoners. She did not stop her agitation until Eamon De Valera began to release prisoners on his accession to power in 1932.


In 1938 she published her autobiography A Servant of the Queen, a vivid account of her life until her marriage. She outlived all her old friends and comrades and, in her old age, described herself as “a prisoner of old age, waiting for release”. She died on the 27th of April 1953, aged 87, and is buried in the Republican Plot in Glasnevin Cemetary in Dublin.