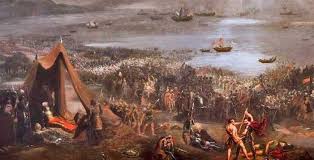 23 April 1014: The Battle of Clontarf /Cath Cluain Tarbh, (The Pasture of the Bulls) was fought on this day – Good Friday. The victors were the forces of King Brian Boru of Munster leading a force primarily of the men of Munster and south Connacht along with a small contingent of Limerick and perhaps Waterford Vikings. His erstwhile ally Mael Sechnaill of Meath held back on the day of the Battle. Thus Brian’s men alone faced the Vikings of Dublin and the Isles and their allies the Leinstermen under King Maelmorda. The result was a great Victory for King Brian but as the day ended he was killed himself while praying in his camp. Clontarf was the greatest and bloodiest battle of the Viking age in Ireland.


The location of the actual battle site has been open to dispute, some of it convoluted in argument, but there is no conclusive proof that it was not at the location of the place we know today as Clontarf, now a suburb of Dublin City. The indications are that both armies were divided into ‘Battles’ that were led by the most prominent Leaders of their respective contingents.


Those the side of the Vikings were Brodar the Manxman, Earl Sigurd from the Orkneys, King Sitric of Dublin and the forces of King Maelmorda of Leinster. It’s possible that around 5,500 men were available to fight against Brian’s Army on the day.

King Brian brought a formidable Army to Dublin to do Battle. He had his own core group made up of the Dal Cais from his Home Territory, the contingents of the men of Munster who owed him allegiance. From south Connacht there were the soldiers of two minor kingdoms related through family ties. He had too the services of perhaps some Vikings drawn from Limerick and Waterford. However around 7,000 warriors would be probably the maximum that Brian had available to bring to Dublin. There was also the Army of the King of Meath, Mael Sechnaill II, who would have at a maximum around 2,500 men to line out alongside Brian Boru.


The battle began at daybreak with challenges and shouts from both sides no doubt. Famous warriors would have been to the fore, eager to meet men of their own calibre in single combat. To the mass of combatants these epic struggles were just a prelude to the main Battles charging at each other and trying their best to emulate their own heroes. As the day wore on the Irish slowly gained the upper hand. The fighting was heavy on what appears to have been a sunny but somewhat windy Spring day. As the numbers of warriors dwindled on each side the fight started to concentrate around the standards and banners of the more important men.

With sunset approaching Victory was finally in the grasp of the Irish. King Brian had been left with just a few men to guard him in his Camp, no doubt men unfit for open combat and a few boys. The excitement of such a great Victory must have had this little Band on edge and they were keen to have a go themselves to finish off any stragglers that they could catch. News of all this was of course reaching Brian so he must have had the grim satisfaction of knowing the day was his. However he received a shattering blow in the closing stages of the battle for his aides had to inform him that Murchad’s Banner could no longer be seen and Brian knew that meant in all probability his beloved son and heir Murchad had fallen.


With Victory within sight the Irish pushed the Foreigners onto the seashore, their boats too far out to get to as the tide reached its high water mark. Many were drowned in desperate attempts to reach sanctuary onboard. The Manxman Brodar however was not amongst these forlorn fugitives. His Battle had been situated on the right flank of the Viking line and in the confusion of the final rout he and a few companions headed inland to avoid being trapped against the shore. As fate would have it his flight led him to Tomar’s Wood. Seeing a tent of some worth situated there he decided to find out to which worthy soul it might belong. Inside he saw just an old man with only a boy to protect him. He did not know who it was but one of his men had once served with the Vikings of Limerick and assured him it was actually King Brian who was inside. Brodar did not hesitate but set about the occupants with his weapon. He slew the King and fled the tent, exultant that his name would now live forever in memory of his bloody deed. Soon however word spread that a Viking had killed Brian and a search was organised to track him down. The pursuers surrounded the wood and in a circle of warriors moved towards the centre of the enclosure to find the killer. Brodar was eventually cornered and ritually disembowelled in a gruesome and bloody execution.


So ended the Battle of Clontarf and Brian’s career. Tactically the battle was a great Irish Victory that smashed the invading force and Strategically it did mark the end of the threat of further Viking interference from overseas. However the cost of Victory had been high. King Brain was dead as was his heir Murchad and in turn his son Turlough. Many of the lesser kings of Munster had also fallen, including Brian’s son in law Cian. On the opposing side Earl Sigurd was dead and Brodar who met such a terrible end. King Maelmorda of Leinster was also killed on the field of battle, probably by Conaig, the nephew of Brian, who died of his wounds in turn. King Sitric of Dublin, if he was ever on the battlefield, returned to the city in time to view the final stages of the Munstermens Victory.

Brian was the most successful King to control Ireland prior to the Anglo-Norman invasion. He had shown that a King could indeed bring the whole island under personal sway. The battle of Clontarf unfortunately undid much of Brian’s work, not just in the fact of his death but also in the loss of his favourite son and heir, Murchad and in turn his son Turlough. Thus on one day three generations of Brian’s family had fallen. Brian was an old man and his death was not far off anyway. Within a few years his son Murchad, had he lived, would have had to face the challenge of imposing his will on the recently united island. He might just have pulled it off if Brian had lived long enough to secure commitments from the other kingdoms to recognise Murchad as his rightful successor to the Kingdom of Ireland.
Posted by Columba Iona at 13:35