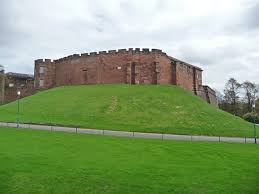 11‭ February 1867: The abortive Fenian Raid on Chester Castle on this day. An audacious plan had been put together by the Fenian Leadership to seize the arsenal at Chester Castle in England.  The plotters would then bring the considerable stock of weapons and ammunition held there to Ireland where they would be distributed to the volunteers in order to overthrow British rule. So much for the plan - but the night before it was to be put into operation the whole scheme was betrayed to the local police by an informer from within the Movement. It had been betrayed by John Carr, alias Corydon who was a paid informer. The cache of rifles had been removed from the castle and the garrison quickly reinforced by another 70 regular soldiers from Manchester.

Despite efforts to turn their men back,‭ an estimated 1,300 Fenians reached Chester, in small parties from Manchester, Preston, Halifax, Leeds and elsewhere. Mostly, they discarded what few weapons they had and melted away. The next day, with nothing now happening, a further 500 household troops arrived by train from London in time for a tumultuous reception and breakfast at Chester hotels.

The man who was the mastermind of the projected operation was John McCafferty,‭ ‬US Citizen and an ex Irish American soldier who had served in the Confederate Army in the American Civil War. Once he realised that his cover had been blown he effected a quick escape with the intention of making it back to Dublin. His accomplice was John Flood and as a result of the hunt now on for them they decided to return to Ireland by collier and not a passage steamer which were all being watched. The ship they returned home on was called the New Draper.

However,‭ when the New Draper arrived at Dublin on the 23rd February 1867, the harbour was being watched. The two Fenians were to be put ashore from the vessel in an oyster boat, but were spotted by policemen, and their vessel was pursued in a chase across the river Liffey involving a ferry, a canal boat and a collier and the men were arrested. Ultimately they were tried for ‘High Treason’ and McCafferty was sentenced to life imprisonment,  but he was released under an Amnesty in 1871.

He returned to the US where he kept up the Fenian Campaign against Britain. He went back to Ireland in the 1870’s and became involved in Mayo bye election of 1874. After a further period of revolutionary activity when he became involved with the Invincibles he went back to America and disappeared.