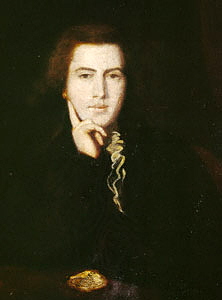 5‭ ‬February‭ ‬1820:‭ ‬The death of William Drennan, United Irishman, on this day. He was born in Belfast in 1754 and educated locally and at Edinburgh University where he graduated as a Medical Doctor in 1778. He returned home and practised in Belfast, Newry and later moved to Dublin in the fateful year of 1789. He became interested in Politics and Poetry. His family background was Presbyterian but he personally was a non conformist. But he was proud to be the son of a Presbyterian Minister all the same:

I am the son of an honest man‭; ‬a minister of that gospel which breathes peace and goodwill among men; a Protestant Dissenting minister, in the town of Belfast; who[se] spirit I am accustomed to look up, in every trying situation, as my mediator and intercessor with Heaven.

Drennan came to National attention when in‭ ‬1784 and 1785 his Letters of Orellana, an Irish Helot were published. These were the earliest expressions of his support for radical constitutional reform, Catholic Emancipation and civil rights.

However as political events both at home and abroad hotted up in the early‭ 1790’s he dabbled deeper into the burning issues of the day. Along with Theobald Wolfe Tone and Thomas Russell he was instrumental in the foundation of the United Irishmen, at the time an open body with strictly legal aims and methods. It is generally considered that Drennan was the guiding hand in the initial philosophical basis of the new body. He had proposed even before it was established that any such organisation should be:

A benevolent conspiracy—a plot for the people—no Whig Club—no party title—the Brotherhood its name—the rights of man and the greatest happiness of the greatest number its end—its general end,‭ real independence to Ireland and republicanism its particular purpose—its business, every means to accomplish these ends as speedily as the prejudices and bigotry of the land we live in would permit.

In‭ ‬1795 he wrote his poem ‘Erin’ which is credited with the first use of the term ‘the Emerald Isle’ to describe Ireland:

Nor one feeling of vengeance presume to defile

The cause,‭ or the men, of the Emerald Isle.

Drennan was not of a sanguinary turn of mind and he recoiled from the prospect of Revolution to bring about the overthrow of the British Regime.‭ Notwithstanding this withdrawal in  the year 1794 he was charged with Sedition and narrowly escaped conviction.

At first he wished to address the Court and make a highly charged political statement but his lawyer talked him out of it. If he had done so it was generally considered he would have convinced his accusers of his guilt in their eyes.

But his days of danger were now over and as his active political life receded he used his pen to attack Tyranny.‭ ‬His poem The Wake of William Orr in 1797 stirred passions that were to foment further opposition towards Orr’s executioners and the Government that paid them. However he kept well clear of the terrible events of‭ 1798.

In‭ 1800 he married an English Lady, Sarah Swanwick, and spent some years in the north of England moving in the Literary and Social circles there. In 1807 he gave up Medicine and returned to Belfast. He founded and edited the radical Belfast Monthly Magazine and was a leading supporter of the Belfast Academical Institution, a doomed attempt to bring to Belfast both secondary and higher level education, open to pupils from both sides of the religious divide.

He died on‭ 5 February 1820 and was buried in Clifton Street burial-ground in Belfast. His coffin was borne to the grave by three Catholics and three Protestants.