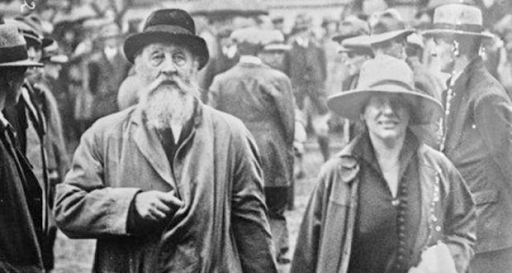 3 February 1917: Count George Noble Plunkett [above with his wife Mary] won the north Roscommon bye election on this day. . It was dubbed “The Election of the Snows” due to the inclement weather prevalent at the time. Its candidate Count George Noble Plunkett took the seat by defeating the candidate of the Irish Parliamentary Party. He was the father of Joseph Mary Plunkett who had been shot by the British for being one of the Leaders of the Easter Rising in1916.

It was a contest between three candidates: Thomas Devine who sought to retain the seat for the Irish Parliamentary Party; Count George Noble Plunkett and the local newspaper owner and editor Jasper Tully of the Roscommon Herald who ran as an independent. All three candidates have professed themselves to be confident of success. Count Plunkett was elected with 3,022 votes to Devine’s 1,708 and Tully’s 687.

Amid scenes of jubilation Count Plunkett  announced that his policy regarding Westminster was one of abstentionism and said:

My place henceforth will be beside you in your own country, for it is in Ireland, that the battle of Irish liberty will be fought. I recognise no parliament in existence, as having a right over the people of Ireland, just as I deny the right of England to an inch of the soil of Ireland. I do not think I will go further than the old house in College Green to represent you. I am sent by Ireland to represent you in Ireland; to stand by you and to win Ireland’s freedom upon her own soil.

His daughter Geraldine, in her posthumously published memoir, remembered: “He was not a member of Sinn Féin, but a separatist supported by a combination of separatists and almost all advanced Nationalist opinion.”

His election sent a clear message that the days of popular support for the old Irish Parliamentary Party were effectively over and a new political movement was abroad - one that would not send its representatives to London but seek to establish an Irish Parliament in Dublin - free from British Rule.