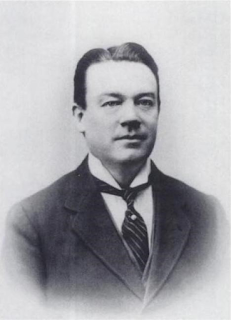 However from an early stage Devlin was noted for his remarkable skills of oratory which he put to good effect in debating the merits of Ireland having her own Parliament to decide her own affairs at home i.e. ‘Home Rule for Ireland’.

During the 1890s he was an active nationalist organiser& founded the United Irish League (UIL) branch in Belfast in 1898.  He was elected unopposed  as Irish Parliamentary Party (IPP) MP for Kilkenny North in 1902.  The Party then sent him to the USA on the first of several successful fund-raising missions.

While there he was very impressed with the Society of Ancient Hibernians & on his return home he used their members and skills to take over control of branches of the UIL & became the General Secretary of the Organisation. He then came to form a close bond with John Dillon MP of the IPP  & moved the UIL into a semi official alliance with his line of thinking which was to avoid compromise with the Landlord class. In tandem Devlin used his links with the AOH [in which he became a Grandmaster] to use its members to effectively control the UIL as well. Under his tutelage the AOH expanded from 10,000 members in 1905 to 60,000 in 1909.

In the 1906 general election, Devlin was re-elected to Kilkenny North, and also to Belfast West which he regained from the Unionists by 16 votes. Choosing to retain the Belfast seat, he served as its MP beyond 1918. He was the Leader of the North as far as Nationalism was concerned and something of an enforcer too against those throughout the Country who deviated from the program of the IPP.

In August 1914 Ireland was on the point of Civil War between Unionists & Nationalists over the Home Rule Crises when the Great War broke out. The Leader of the IPP John Redmond decided to support the War effort & encouraged Irishmen to join the Colours and take part in the Conflict. In this Devlin backed him and in the northern counties there was widespread nationalist recruitment into the British Army. Home Rule was put on hold for the duration of the War.

After the 1916 Easter Rising Devlin compromised with Northern Nationalists agreeing on a temporary six-county exclusion to assist Lloyd George's abortive home rule negotiations, organising a convention which endorsed his stance by a vote of 475 to 265. In April 1918 Devlin opposed the Conscription Bill & was returned for West Belfast in the December  ‘Khaki Election’ of that year, one of only six IPP members to do so! He really took a back seat after that but was present in the House of Commons in the aftermath of Bloody Sunday in November 1920 & when he attempted to raise the Atrociety he was shouted down & physically attacked by a fellow member the House.

He had an on- off relationship with the new northern parliament at Stormont, first opposing it then reluctantly taking his seat in 1925 just so the nationalist voice would not be left completely unheard. But after PR was abolished there in 1929 he chose to stand in Fermanagh -South Tyrone and represented the constituency until 1932 at Westminster where he won an amendment to the Northern Ireland Education Act of 1930 which improved the funding of Catholic schools.

A popular and outgoing character he was well known to his constituents and organised ‘Summer Fetes’  that were very well attended. A Director of Distillery Company and chairman of the ‘Irish News’ paper he was comfortably well off but never married.

A lifelong bachelor, Devlin, though short in stature (he was known in Belfast as ‘Wee Joe’ – and by Tim Healy , less affectionately, as ‘the duodecimo* Demosthenes’  was apparently highly attractive to women, and took a special interest in their problems. He was to found a holiday home for working-class women. Belfast linen workers in the late 1960s and early 1970s remembered him as a champion of the workers decades after his death.

He died in Belfast on 18 January 1934 and his funeral was at St Peters on the Falls Rd which was attended by members of both the Stormont & Leinster House Governments. He was buried in Milltown Cemetery.