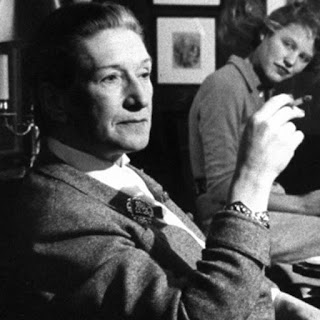 22 February 1973: Elizabeth Bowen author, socialite and spy[?] died on this day. Of Anglo Irish stock she was born at 15 Herbert Place in the city of Dublin on 7 June 1899. Her parents were Henry Charles Cole Bowen and Florence (née Colley) Bowen. In 1907 her father declined into mental illness and she moved with her mother to England where they took up residence at the seaside town of Hythe in Kent. Tragedy was to strike her again though when her mother died in 1912. After that she was brought up by a committee of Aunts and shunted back and forth between them.
It was only as she grew older that she realised the chasm between the closed world of the Anglo-Irish set she belonged to and the bulk of the Catholic population of Ireland:
‘It was not until after the end of those seven winters that I understood that we Protestants were a minority, and that the unquestioned rules of our being came, in fact, from the closeness of a minority world’...
I took the existence of Roman Catholics for granted but met few and was not interested in them. They were simply “the others,” whose world lay alongside ours but never touched.'
Elizabeth Bowen, Bowen’s Court & Seven Winters: Memories of a Dublin Childhood, (London: Virago, 1984;1942)
After some time at art school in London she decided that her talent lay in writing. She mixed with the Bloomsbury Group, which contained some the most talented and outrageous (for the time) people involved in the London Arts scene. Her first book, a collection of short stories entitled Encounters was published in 1923. It was in that year she married one Alan Cameron. He had served in the Great War in which he was badly gassed. The marriage has been described as "a sexless but contented union." The marriage was reportedly never consummated! She reputedly had numerous extra martial affairs with other men though they stayed married until his death in 1952.
The great love of her life was Charles Ritchie, a Canadian diplomat of great charm and intelligence from a privileged Nova Scotia background. They first met in 1941 and continued an On-Off relationship for over 30 years until her death. She really could not live without knowing that he loved her - but to him she was a fascinating creature though not the absolute centre of his life. He later married another woman and that must have hurt Elizabeth - but there was nothing she could really do about it.
But while an author of some note its clear her personal life was an unsettled one. The loss of her parents while still a child must have had a had a huge impact on her psyche that left her reserved and unsure in human relations though with a great deal of silent perception on the frailties of the human condition. Though somewhat cryptic in style her reading of human nature was what made her novels such gems in the way she described her characters and the rarefied world that they moved through.
Strangely in Ireland she is remembered as much for her writing reports from here during the Second World War to the British Ministry of Information in London about the attitudes and feelings of the Great and the Ordinary towards Britain and the War - for which some have labelled her a ‘Spy’. A matter of opinion really.
She tried to spend as much time as possible at her beloved Bowen’s Court in Cork, the family seat she inherited in 1930. But while it was a idyll away from the drudgery of London its upkeep was a huge burden on her finances. Eventually it led her to a nervous breakdown, a string of unpaid debts and the sale and eventual demolition of Bowens Court in 1960. She returned to London and witnessed the ‘Swinging Sixties’ there. A smoker she developed Lung Cancer in 1972. That year she saw out her last Christmas in Ireland staying with friends in Kinsale Co Cork. She died in London on 22 February 1973, aged 73. She is buried with her husband in Farahy Co Cork  churchyard, close to the gates of Bowen's Court, where there is a memorial plaque to her.
Her best-known novels are The Death of the Heart and The Heat of the Day, but her own favourite was The Last September, published when she was still in her 20s; it was, she said, the work of hers “nearest to my heart”.
Her prose is so subtle and allusive that it would be a disservice to quote from her, but read almost any descriptive passage in The Last September and you will understand her greatness.
John Banville Irish Times 7 March 2015
Posted by Columba Iona at 04:50