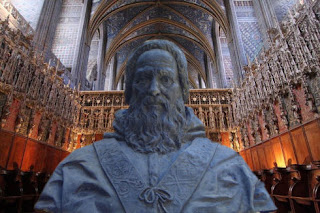 25‭ ‬February 1570: Saint Pope Pius V [above*] excommunicated Queen Elizabeth of England on this day. He issued a Papal Bull called Regnans in Excelsis (‘ruling from on high’) that absolved all her subjects from any obligations of allegiance to her. It read in part as follows:
"We charge and command all and singular the nobles, subjects, peoples and others afore said that they do not dare obey her orders, mandates and laws. Those who shall act to the contrary we include in the like sentence of excommunication."
As Elizabeth claimed Ireland as part of her inheritance this Papal decree released by inference the Catholics of Ireland from any sense of obligation to her they may have felt.‭ While the excommunication was of no personal interest to Elizabeth - who had long since abandoned the Catholic Faith - the political ramifications were profound. The Excommunication made her dealings with the Catholic Powers of Europe more problematical and difficult and increased the chances of Spain under Philip II in particular lending his support to revolts within these islands.
In response she increased anti-Catholic persecution and set out to eliminate the presence of the Jesuits from her Realms.‭ The position of the ‘New English’ Protestants in Ireland was made even more precarious as the Catholics here saw that the Pope himself was now openly opposed to her rule. The English Monarch did not have a high opinion of the Irish anyway as she expressed in a Letter to Sir Francis Walsingham in that month of February 1570:
We have heard and knowne it to be true,‭ that certain savage rebells, being men of no valour, had fled out of our realme of Ireland into Spaine, and to cover their lewdness, and procure both reliefe for themselves and for such like as they are in Ireland, they do pretend their departure out of the land for matter of religion, where indeed they be neither of one nor other religion, but given to beastiality, and yet have they writt enough to shewe hypocrisy for their purpose.
While tenuous on off relations between the Vatican and St James Palace continued in the years after Elizabeth’s reign it was not until the French Revolution that regular envoys were exchanged. Full relations were not established until April 1 1982 when Sir Mark Heath presented his credentials to Pope John Paul II and thus became the United Kingdom’s first ever ambassador to the Holy See.