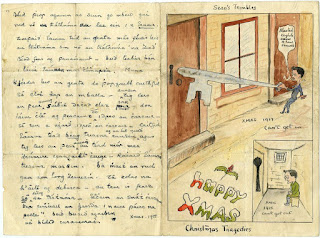 3‭ ‬February‭ ‬1919:‭ ‬Eamon De Valera escaped with two other prisoners from Lincoln Jail in England on this day.‭ ‬They did this with the aid of a copy of the master key and the assistance of Michael Collins on the outside directing operations.‭ ‬De Valera companions were Sean McGarry and Sean Milroy who was put to the task and drew a cartoon of a drunk man trying to fit a large key into a tiny keyhole on what appeared to be a harmless Christmas card. [above]  The proof-readers were duped: the image sent to their associates was, in fact, a copy of the impression taken by de Valera. Thus Collins knew how the prisoners intended to make their break for Freedom.
‭ ‬A skeleton key had been fashioned  by Dev which he had secured from the Prison Chaplain who had carelessly left down his set of keys so that it was possible to make an imprint onto a lump of wax made from old alter candles. After many trials and errors that produced copies but not any that would fit the prison locks a fellow Republican prisoner Peter De Loughry (who was an expert locksmith) asked that a blank key and a file be smuggled in and he would fashion a key inside the prison from Dev’s lumpen imprint. All he needed was the instruments he had asked for which were sent into the jail in the time honoured way - concealed in a cake!
On the day appointed the three prisoners put their plan of escape into action and made their way through various locked internal doors until they reached the outer one.‭ ‬Here it had been arranged that Michael Collins would use his copy to open the door from the street outside.‭ But disaster struck as Collins broke his in the lock and the end stuck in the keyhole. He hoarsely whispered into the men behind the door what had happened. Beside him stood Harry Boland aghast at the turn of events. The situation was now very desperate as it could only be a matter of time before the alarm was raised and a point of no return had already been reached. But Dev displayed his customary coolness and pushed his own key into the hole and by good grace pushed out Collins broken nub and turned the key to Freedom. A quick embrace and a sigh of relief was all there was time for as the men made their way across the fields and into a waiting Taxi that got them away and back to Ireland.
''Lincoln Christ Hospital School was a military hospital at the time and the prisoners had to bluff their way past some convalescing soldiers who were courting with some of the nurses outside the hospital.
The escapees hurried down Wragby Road to the Adam and Eve pub where a taxi driver was waiting (unaware of who his passengers were). They were driven to Worksop where another helper had a taxi booked to take them to Sheffield, and ultimately to a safe house in Manchester.''
Éamon de Valera’s Escape from Lincoln Prison | Visit Lincoln Blog
This escape was a great Coup for the Irish Republican Movement and as a result the men were able to return to Ireland incognito and escape capture by the British. It enabled De Valera to replace Cathal Brugha as President of Dáil Éireann and to organise his journey onwards to the USA where he as President  was to drum up a huge level of support for the ‘Cause’ back home.
They are the only men to have ever successfully escaped from Lincoln Jail.
Posted by Columba Iona at 05:38