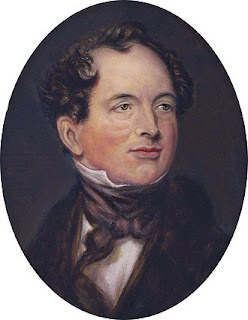 25 February 1852: Thomas Moore, Bard of Erin died on this day. He is best known today as the lyricist for ‘Irish Melodies’ in which he set lyrics to ancient Irish pieces whose origins stretched back many years beforehand. His Life however was much more than that.
He was born above his parents shop in Aungier St Dublin on 28 May 1779 & later attended Samuel Whyte's English grammar school whose other great alumni was the playwright and politician Richard Brinsley Sheridan, of whom Moore was one day to write a biography. It was while he was at Whyte’s  that he first developed his taste for the stage. On completing his scholarly studies he went on in 1795 to Trinity College to study for Law. At that time Ireland was in a state of ferment with Revolutionary sentiment sweeping the land. Moore too was swept along in the enthusiasm of the times but stopped short of fully committing himself to violent Revolution. In April 1798, Moore was acquitted at Trinity on the charge of being a party, through the Society of United Irishmen, to sedition.
The following year he departed for London where he continued his law studies at the Middle Temple. He was gradually drawn into the artistic world of this great metropolis and the necessity in those days of acquiring patrons to advance in Society. Moore's translations of Anacreon, celebrating wine, women and song, was published in 1800 with a dedication to the Prince of Wales. In 1801, Moore published a collection of his own verse: Poetical Works of the Late Thomas Little Esq. However nothing really came of any of this and in 1803 he sailed across the Atlantic  to become the registrar of the Admiralty Prize Court in Bermuda. He hated it and soon found a replacement so that he could travel to the USA and tour the Great Republic. He hated there too & the people he met even more, especially those with an attachment to the institution of Slavery.
On his return to London he built on his experience and acquainted himself with some of the most illustrious members of the City's’ artistic community. However the making of his name undoubtedly rests on his writing the lyrics to the work known as ‘Irish Melodies’ [1808] based on a collection of  old Irish compositions. The principal source for the tunes was Edward Bunting's A General Collection of the Ancient Irish Music [1797]. The scores were arranged by Dublin born Sir John Andrew Stevenson with Moore putting the lyrics to them. They were an immediate & huge success and many of them are still extant in the singing world to this day e.g.  the "The Last Rose of Summer", "The Minstrel Boy", "Believe Me If All Those Endearing Young Charms" and "Oft in the Stilly Night" becoming immensely popular.
Thomas Moore was much involved in Politics as a ‘squib’ writer for the Whig party in England that was by the standards of the time was more progressive in outlook to Reform of the political order. He came under the patronage of various members of the Whig Establishment though how much he financially made directly or if anything at all is problematical - he always denied that he did. Though in that Age patronage was pretty well essential to open doors into Society.
Moore was also an actor and a singer of some note and he returned to Ireland on many occasions to perform on the stage. Through this medium he met his one & only wife  Elizabeth "Bessy" Dyke, they had five children together but alas they all pre-deceased their parents.
Possibly next to being the author of the lyrics for Irish Melodies the most famous or infamous incident in his life was his part in destroying the unpublished memoirs of his great companion Lord Byron who had entrusted the manuscript to him for safekeeping. However after the poets’ death [1824] Lady Byron wanted it destroyed as its contents were judged too shocking by those closest to him in this life. In what some were to call the greatest literary crime of the century, in Moore's presence the family solicitors tore up all extant copies of the manuscript and burned them in the fireplace!
Thomas Moore spent most of his professional life in London but never forgot his Homeland and lauded the efforts of the men of 1798 and 1803 to free her from Oppression. He much admired Lord Edward Fitzgerald one of the great heroes of the Rising of 1798. He had a particular contempt for Lord Castlereagh who had facilitated the passing of the Act of Union [1800] that abolished Ireland’s Parliament.
On point of Religion Moore took a middling course between Catholicism and the Anglican Church, he was theologically a doubter but could not completely break away from the religious culture of his upbringing - today he would probably be called a ‘Cultural Catholic’.
History & Biography was another subject to which he turned his pen and he published a Life and Death of Lord Edward Fitzgerald and Memoirs of the Life of Richard Brinsley Sheridan the latter being a great success. His ‘History of Ireland’ published in four volumes between 1835 and 1846, was an enormous work but did not catch the public’s imagination.
But by the late 1840s his powers were fading and with his wife and all his children dead he drifted into senility. The end came on 25 February 1852 in his seventy-third year and he was buried at Bromham, near Devizes in Wiltshire. His epitaph in St. Nicholas churchyard grave is inscribed:
Dear Harp of my Country! in darkness I found thee,
The cold chain of silence had hung o'er thee long;
When proudly, my own Island Harp, I unbound thee.
And gave all thy chords to light, freedom and song!
Posted by Columba Iona at 01:11