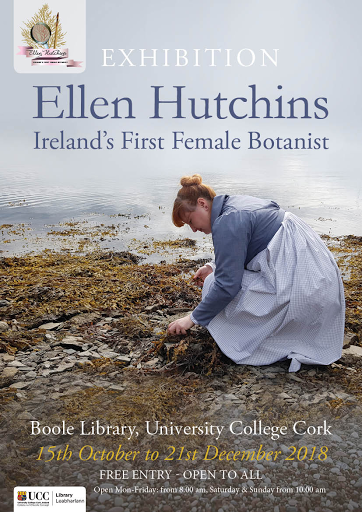 9 February 1815: Ellen Hutchins, Ireland’s first Lady botanist, died on this day. Miss Hutchins was a self effacing girl who kept herself to herself and steered a lonely path through this world. For solace in her life she turned to the study of the Natural World in the shores and creeks of her native Bantry in south west Ireland. Her pioneering work helped lay the foundations of the study of this Country’s Natural Flora and Fauna.

Ellen was born in 1785 at Ballylickey House, Bantry, Co. Cork, one of the six surviving children of Thomas and Elinor Hutchins. Her father was a wealthy protestant tenant of a catholic landowner, Lord Kenmare. But her father died when she was very young and eventually she was packed off the Dublin to stay with a Dr William Stokes and his family at Harcourt Street, Dublin. Dr Stokes was Professor of Medicine at the Royal College of Surgeons from 1800 and he had a keen interest in botany, founding the Botanic Gardens at Trinity in 1806.  It was through Dr Stokes that Ellen met the next of her mentors, James Townsend Mackay, the first curator of Trinity’s Botanic Garden.

‘Ellen’s particular branch was in cryptogamic botany, the study of non-flowering plants (the term ‘cryptogam’ does indeed come from the same root as ‘cryptic’). These algae, mosses, liverworts and seaweeds to which Ellen devoted her keenest attentions, were vastly understudied compared to the more easily observed flowering plants. In addition, Ellen was collecting specimens in the Bantry Bay environs, an area containing an interesting dispersal of rare flora. The combination of very good eyesight and great artistic talent meant that she could render the fine detail of species in exquisite detail.’

‘Her field work was done in the Bantry environs in her early twenties. Between 1809 and 1811, she identified and listed (in Latin) around 1100 plants around Bantry Bay. Her distant cousin and friend Thomas Taylor most likely got her on to collecting shells and she began studying molluscs.’

But alas Ellen’s life was not a happy one. She had been forced to return to the family home in Bantry to look after her aging mother and her brother who was an invalid. Her outings in search of specimens was her only break from a life of drudgery and toil. To make matters worse her elder brother kicked them out of the family home and they had to move away. Ellen herself was sick herself by this stage.  She was consumptive and taking mercury for a liver complaint – the effects of which had reduced the young woman to ‘a mere skeleton’.

Eventually her situation overwhelmed her and it would appear she did away with herself. She was buried in an unmarked site outside the south wall of Garryvurcha Church, Bantry. Her invalid brother Thomas passed away a few months later.

William Henry Harvey was greatly influenced by the work of Ellen Hutchins. Years after her death, wrote in 1847 of her lasting effect on Irish botany in his work Phycologiae Brittanica:

‘[Her] name is held in grateful remembrance by botanists in all parts of the world. To her the botany of Ireland is under many obligations, particularly the cryptogamic branch, in which field until her time little explored. She was particularly fortunate in detecting new and beautiful objects, several of which remain the rarest species to the present day.’