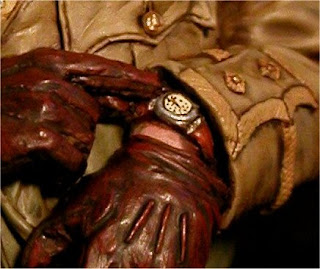 1 July 1916: The Battle of the Somme began on this day. After an immense bombardment lasting a week the British Army launched its Summer Offensive at precisely 7.30 am that morning. General Rawlinson commanded the British 4th Army, which contained 15 Divisions earmarked for the Offensive.

Rawlinson’s tactical plan was to see the infantry advance across no man’s land at a walking pace, carrying a full load of equipment (66 lbs. per man), to take possession of the German trenches from a demoralised and shaken foe. However during the bombardments most of the German troops took refuge in deep bunkers. Once the artillery had stopped firing on the front line trenches and the attack was imminent these men rushed to the surface and manned their posts. It was the failure of the British to anticipate the speed of the Germans reaction to the lifting of the barrage that led to their defeat on the 1 July. The casualties suffered by the attacking forces numbered almost 60,000 men incl about 20,000 dead. Many of these men were from Ireland.

The men of the 36th Ulster Division carried out the most famous attack of the day. They took the German stronghold of the Schwaben Redoubt by storm and overwhelmed the defenders. However due to the almost universal failure of the other attacking battalions on their flanks to take their objectives the Ulstermen were left dangerously exposed. They were out in a salient that the Germans were able to enfilade with devastating results. Despite a grim determination to hold their positions the 36th was forced back and the order was given to withdraw to their start lines. Given that they had suffered thousands of casualties that day this was a bitter pill to swallow - but a legend was born that day that still resonates down to our own times.

Captain (later Lieutenant-Colonel Sir) Wilfrid Spender, of the Ulster Division’s HQ staff, commenced his famous account that was widely carried by the British press, with the following words:  ‘I am not an Ulsterman but yesterday, July 1, as I followed their amazing attack, I felt that I would rather be an Ulsterman than anything else in the world.’

The other great attack that day that had strong Irish connections was the series of assaults carried out by the 34th Division. This included the 103rd Tyneside Irish Brigade from Northumberland, in the main consisting of the descendants of Irish immigrants in the 19th Century to the coalfields there. However the connections with Ireland were still extant and these men were proud of their ancestry. That day they met the full force of the German machine-guns as they went over the top and were slaughtered in great numbers. For them there was no success to match the sacrifice made and thousands lay dead and wounded upon the field of battle for no great purpose.

There were also Irish battalions engaged this day within other Divisions and some 14 battalions with definite Irish identities took part in the day’s battle. In addition thousands more served in an individual capacity in various units like those raised in Liverpool, Manchester and London as well as in units with no particular connections to Ireland like the 1st South Staffordshire’s. Thus on 1st July 1916 many men from Ireland met their end in one of the bloodiest days in Military History. The survivors too never forgot that terrible day when so many from this island fought and suffered on the bloody fields of Picardy.