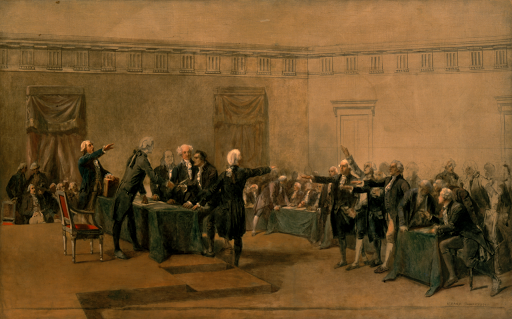 The unanimous Declaration of the thirteen united States of America

When in the Course of human events, it becomes necessary for one people to dissolve the political bands which have connected them with another, and to assume among the powers of the earth, the separate and equal station to which the Laws of Nature and of Nature's God entitle them, a decent respect to the opinions of mankind requires that they should declare the causes which impel them to the separation.

We hold these truths to be self-evident, that all men are created equal, that they are endowed by their Creator with certain unalienable Rights, that among these are Life, Liberty and the pursuit of Happiness.--That to secure these rights, Governments are instituted among Men, deriving their just powers from the consent of the governed...

The document set out the rights that should be enjoyed by all citizens of the New Republic. It is one of the most important political documents that modern history has produced. There was a strong Irish input into its drafting and wording that reflected the experience of life under Monarchical and Aristocratic rule back in 18th century America and Ireland. Nine men who were either born in Ireland or whose parents or grandparents were from Ireland signed that day.

Thomas McKean (March 19, 1734 – June 24, 1817) was the son of William McKean from County Antrim. He would become an American lawyer and politician, serving as President of Delaware, Chief Justice and then Governor of Pennsylvania.

Charles Carroll of Carrollton in Maryland (September 19, 1737 – November 14, 1832). Though born in America his parents were Irish and he was the only Catholic signatory and also the longest-lived signatory of the Declaration of Independence, dying at age 95.

James Smith was born in Ireland in c.1719 and was forced with his family to emigrate to the American colonies as a boy due to abuse by landlords. The name "Smith" in Ireland is oftentimes a translation of MacGabhann, which is an older Irish name meaning "son of Goibhniu," who was the Celtic deity of metallurgy.

George Taylor was born in Antrim, Ireland in 1716 and emigrated to America in 1736 at the age of 20. Taylor operated a furnace and was an iron manufacturer in Pennsylvania. He was a member of the Committee of Correspondence, 1774-1776, and of the Continental Congress, 1776-1777.

Matthew Thornton was born in Ireland in 1714 and went out to America as a four-year-old child. He would practice medicine and become active in pre-revolutionary agitation before being elected to become a member of the Continental Congress in 1776. He was a Colonel of New Hampshire Militia, 1775-1783.

Edward Rutledge (November 23, 1749 – January 23, 1800) was the youngest signer of the Declaration of Independence. His father Dr. John Rutledge left Co.Tyrone, Ireland in 1735, and would raise a son to be 39th Governor of South Carolina.

Thomas Lynch Jr. (August 5, 1749 – 1779) stood in for his father Thomas Lynch Sr. who was unable to represent South Carolina due to illness. His grandfather was Jonas Lynch of the Galway who were exiled following the defeats at Aughrim and the Boyne. At the close of 1776 he and his wife sailed for the West Indies. The ship disappeared and there is no record of his life after.

George Read was born in Maryland in 1733. He was the son of John Read and Mary Howell Read. John Read was a wealthy resident of Dublin who emigrated to Maryland. When George Read was an infant the family moved to Delaware.

John Dunlap was born in Strabane, County Tyrone. In 1757, when he was ten years old, he went to work as an apprentice to his uncle, William Dunlap, a printer and bookseller in Philadelphia.

During the American Revolutionary War, Dunlap became an officer in the First Troop Philadelphia City Cavalry, and saw action with George Washington at the battles of Trenton and Princeton.