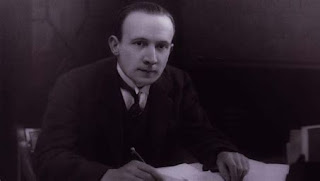 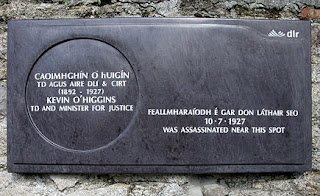 10 July 1927: The Assassination of Kevin O’Higgins, Vice-President of the Executive Council, Minister for Justice and Minister for External Affairs on this day.
His role in the Irish Civil War had still not been forgotten or forgiven by many Republicans. He had taken the side of those supporting the Anglo-Irish Treaty of 1921, which included an Oath of Fidelity to the British King. While a brilliant Minister and a shrewd politician he was also a man of ruthless determination. His decision to acquiesce in the execution of the best man at his own wedding, Rory O’Conner, was seen as a particularly hard act. He was viewed by quite a number of people as the most forceful personality in the Cumann na nGaedheal government. As a result of this legacy of bitterness plans were laid by a small group of Republicans to carry out an attempt on his life.
On the fateful Sunday in question O’Higgins left his house, (situated in south County Dublin)accompanied only by his bodyguard Detective O’Grady. His intention was to attend Mass at the local Catholic church on Booterstown Avenue. The Minister clearly forgot something along the way and he sent O’Grady back to fetch it, whatever it was. He then proceeded on alone down Cross Avenue to its junction with that of Booterstown. It was here that the assassins struck. A number of them approached him and opened fire simultaneously. Shot a number of times O’ Higgins started to run slowly across Booterstown Avenue only to collapse at the gates of a private residence, Sans Souci.
The gunmen thought they had mortally wounded him but then O’Higgins inadvertently committed a fatal error. He raised his hand, possibly to call attention to his plight. His assailants at once returned and pumped him full of more bullets before fleeing in a car up the avenue and off down the Stillorgan road in the direction of the nearby countryside.
Within minutes people were rushing to his aid. Amazingly one of them was an ex Cabinet colleague, Professor O’Neill who had been making his way to Mass at the same time. O’Higgins was brought back to his home and made as comfortable as possible in the dining room. While conscious, he was in great pain as he had sustained a considerable number of gunshot wounds, the one to the skull proving to be the fatal shot. He was bleeding profusely by this stage and O’Higgins realised that his situation was hopeless. His dignity in the face of death drew the admiration of all who were with him in his final hours. Quite a number of people called in to pay their last farewells before the end. O’Higgins died at 4.45 that afternoon.
Most people were shocked by the news. The action was universally condemned. Even Eamon De Valera was taken aback by the brutal death of his political opponent and he swiftly moved to disassociate both himself and his party from this violent and gratuitous deed. However it is true to say that not all of his supporters were that upset by O’Higgins death.
The following day O’Higgins body was removed from his home. President Cosgrave and the members of his Cabinet, along with General O’Duffy and nine senior officers of the Garda Síochána were in attendance to accompany the Minister’s remains to a lying in state at the Mansion House, Dublin. Huge crowds queued for hours to pay their final respects.
His remains were removed from his residence, Dunamase House, Booterstown, to the Mansion House, Dublin, where thousands filed past the coffin. His funeral mass was held at St Andrew’s Church, Westland row. The funeral cortège stretched for over 3 miles. O’Higgins was buried in Glasnevin cemetery, the same grave as his infant son.
For years his assassins were unknown to the general Public. However it is now known that they were three IRA members acting off their own bat. They did it in order to avenge the loss of their comrades in the Civil War, in which O'Higgins played such a prominent role in the execution of Republican prisoners and the introduction of draconian legislation to deal with the Anti Treaty IRA. They were Timothy Coughlan, Bill Gannon and Archie Doyle. None of them were ever charged with what they did that fateful day.
* The plaque above was erected near the spot where he was gunned down in 2012 by then An Taoiseach Enda Kenny
Posted by Columba Iona at 12:26