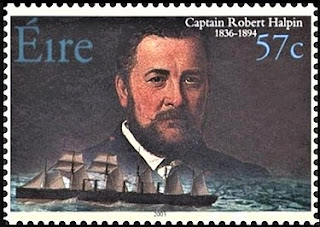 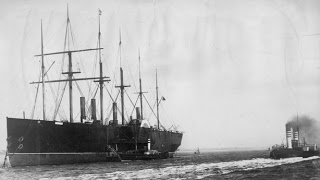 13 July 1866: The Great Eastern steamship [above], the largest vessel afloat at that time, departed Valentia Island Co Kerry for Newfoundland on this day. Its task was to attempt once again to try and lay a working telegraph cable from Europe to the Americas.

‘It was the brainchild of American entrepreneur Cyrus Field, who made two unsuccessful attempts before finally succeeding. The first officer on the Great Eastern - the biggest vessel in the world at the time - was Wicklow native Captain Robert Halpin. While Belfast born scientist and engineer, Lord Kelvin, worked on the technical aspects of the cable. Prior to the laying of the Transatlantic Cable it took approximately two weeks for message from Europe to reach North America … weather permitting as all communications were sent via boat.

The idea of a transatlantic cable was first proposed in 1845, but the distances and depths presented formidable problems. In 1856 the Atlantic Telegraph Company was registered with a capital of £350,000 (then about $1,400,000). On the American side Cyrus W. Field was the driving force; on the British side it was Charles Bright and brothers John and Jacob Brett.

After so many failed attempts, the final, successful, cable was laid with virtually no problems. On 27 July 1866, the cable was pulled ashore at a tiny fishing village in Newfoundland known by the charming name of Heart’s Content. The distance was 1686 nautical miles from Valentia Island. The Great Eastern had averaged 120 miles a day while laying out the cable.

The first message sent on this, finally successful, cable was: “A treaty of peace has been signed between Austria and Prussia”. Queen Victoria, then at Osborne, in the Isle of Wight, sent a message to the President of the United States. “The Queen congratulates the President on the successful completion of an undertaking which she hopes may serve as an additional bond of Union between the United States and England.'' *

Almost immediately, the cable opened for business but only the very wealthy could afford it – the initial rates were a startling $1 a letter, payable in gold – at a time that a monthly wage for a labourer might be $20.''

The ship’s Captain was Robert Charles Halpin of Co Wicklow who led the successful attempt to repair the line and also layed thousands of miles of vital cables to link together various far flung locations across the Globe. This helped usher in the Age of Telegraphy which enabled men and nations to communicate together at faster levels than ever before.

For the next 100 years Valentia Island was a major portal for the dispatch and reception of messages between the distant continents in what was for its time an Information Superhighway in itself. The station finally ceased being a conduit for transatlantic communication in 1966 when air mail & satellites made it un-economic to maintain it any longer. It was an end of an Era.

* No mention of Ireland!