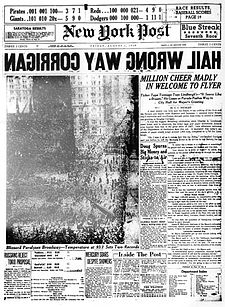 18 July 1938: Douglas Corrigan  -‘Wrong way Corrigan’ - landed at Baldonnel Aerodrome  Co Dublin after flying across the Atlantic solo in his aircraft Sunshine on this day. His arrival was totally unexpected and on being asked from whence he came he answered ‘New York’ - much the incredulity of those who had gathered around him.

Despite his assertion that he had simply lost his way on take off and instead of turning west for California he had  inadvertently headed east for Ireland no one really believed him. He had started his working life as a mechanic and had caught the Flying Bug when he took a ride up in a plane some years previously. He got his pilots license & took up stunt flying to earn a living. But he always hankered to do something out of the ordinary and settled on Ireland (the Homeland of his ancestors) as a place he would like to fly to.

He saved up his salary and spent $300 on buying a second hand 1929 Curtiss Robin OX-5 monoplane and flew it home, where he returned to work as an aircraft mechanic and began to modify the Robin for a transatlantic flight. Having installed an engine built from two old Wright Whirlwind J6-5 engines (affording 165 hp (123 kW) instead of the 90 hp (67 kW) of the original) and extra fuel tanks, Corrigan applied to the Bureau of Air Commerce in 1935, seeking permission to make a nonstop flight from New York to Ireland. The application was rejected; his plane was deemed unsound for a nonstop transatlantic trip, although it was certified to the lower standard for cross-country journeys.

Corrigan's plane had fuel tanks mounted on the front, allowing him to see only out of the sides. He had no radio and his compass was 20 years old, but somehow he made it. His daring flight alone across the Atlantic Ocean made headlines across the World. Back in the USA he was nicknamed ‘Wrong Way Corrigan’ when he claimed to have flown East instead of West on take off. It was said that his tickertape parade through the streets of New York City outshone that of his great hero Charles Lindbergh - who curiously never acknowledged his achievement.

The journalist H.R. Knickerbocker who met Corrigan in Ireland after his arrival, wrote in 1941:

You may say that Corrigan's flight could not be compared to Lindbergh's in its sensational appeal as the first solo flight across the ocean. Yes, but in another way the obscure little Irishman's flight was the more audacious of the two. Lindbergh had a plane specially constructed, the finest money could buy. He had lavish financial backing, friends to help him at every turn. Corrigan had nothing but his own ambition, courage, and ability. His plane, a nine-year-old Curtiss Robin  was the most wretched-looking jalopy.

As I looked over it at the Dublin airdrome I really marvelled that anyone should have been rash enough even to go in the air with it, much less try to fly the Atlantic. He built it, or rebuilt it, practically as a boy would build a scooter out of a soapbox and a pair of old roller skates. It looked it. The nose of the engine hood was a mass of patches soldered by Corrigan himself into a crazy-quilt design. The door behind which Corrigan crouched for twenty eight hours was fastened together with a piece of baling wire. The reserve gasoline tanks put together by Corrigan, left him so little room that he had to sit hunched forward with his knees cramped, and not enough window space to see the ground when landing.

The following year, he starred as himself in The Flying Irishman, a movie biography. The $75,000 he earned was the equivalent of 30 years income at his airfield jobs! During the War he flew planes for the US Transport Command and then went back to California where he bought an Orange Farm. He died there in 1995. To the end he never admitted to anything other than flying ‘the wrong way’.