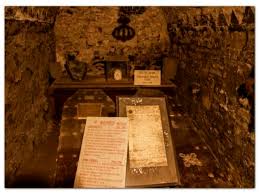 14‭ July 1798: The Patriot brothers John and Henry Sheares were executed on this day. They were both members of the Legal Profession and had joined the United Irishmen to fight tyranny and free Ireland from English rule. They were the sons of a wealthy banker who sat as a member of the Parliament in Dublin. In 1792 they had visited Revolutionary France and had caught the Spirit of the times there. They soon joined the United Irishmen on their return.

‭However they trusted others without caution and were led into revealing details of the conspiracy to overthrow the Ascendancy. A Spy, one Captain John Armstrong who had befriended them in order to betray them, revealed their intentions to Dublin Castle. They were arrested on 21 May 1798. Found guilty of treason, they were publicly hung, drawn & quartered outside Newgate Prison [Green Street] in Dublin. Both were buried in the vaults of St. Michan's Church in Dublin City where their perfectly preserved coffins [above] are still on display.

At midday on Saturday,‭ ‬July 14th, the hapless men were removed to the room adjoining the place of execution, where they exchanged a last embrace. They were then pinioned, the black caps put over their brows, and holding each other by the hand, they tottered out on the platform. The elder brother was somewhat moved by the terrors of his situation, but the younger bore his fate with unflinching firmness. They were launched together into eternity--the same moment saw them dangling lifeless corpses before the prison walls. They had lived in affectionate unity, inspired by the same motives, labouring for the same cause, and death did not dissolve the tie. "They died hand in hand, like true brothers."