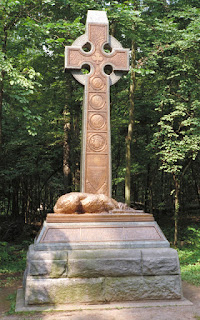 2 July 1863: The Irish Brigade of the Army of the Potomac fought at Gettysburg on this day. It consisted of men from the - 63rd, 69th and 88th New York Infantry and 14th New York Independent Battery Artillery - though much depleted in numbers by the time they arrived there. It was officially the 2nd Brigade, 1st Division, 2nd Corps of the United States Army. In one of the most famous incidents of the American Civil War they were blessed and granted general absolution by Father William Corby, the Brigade Chaplain, in front of thousands of their comrades in arms who witnessed this awe inspiring spectacle.

Little more than 500 men remained of the original 3,000 veterans of the brigade, but they were to be sent to the rescue of the crumbling Union flank in a vicious maelstrom that would become known to history as The Wheatfield. Father Corby donned his stole and mounted a large rock as the men of the brigade knelt, Catholic and Protestant alike. He offered absolution to the whole brigade, reminding them of their duties and warning them not to waver and to uphold the flag. Their attack bought precious time for the Union defenses but cost them dearly, with over one third of the brigade becoming casualties.

The monument is a Celtic cross supported by a granite base, standing 19’ 6” tall. It was sculpted by William R. O’Donovan, a former Confederate soldier who fought at Gettysburg. The front of the cross is an ornate bronze ornamented by a 2nd Corps trefoil, the numbers of the three New York regiments, the Seal of the State of New York, and a harp flanked by eagles. At the foot of the cross lies a life sized Irish wolfhound, symbol of honor and fidelity. The monument was dedicated on July 2nd, 1888.

Father William Corby, a chaplain to the Irish Brigade, attended the dedication, held a mass for the veterans and blessed the monument. “We have unveiled this pile, and it will stand to perpetuate the fame of those heroes. To keep their memory green in the American heart, this Celtic Cross has been erected. It is an emblem of Ireland, typical of faith and devotion, and the most appropriate that could be raised to hand down to posterity the bravery of our race in the great cause of American liberty.”