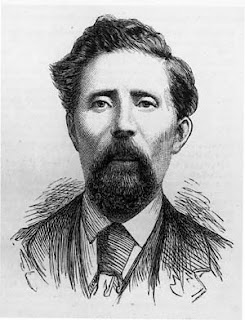 29‭ July 1883: James Carey, the man who informed on the Phoenix Park assassins (The Invincibles), was shot dead on this day. He was killed by Patrick O'Donnell (executed 17 November) on board the Melrose Castle, which was making its way from Cape Town to Durban with the turncoat on board. On the evidence of James Carey five of the "Invincible" prisoners had been convicted and received the capital sentence. Their names were Joseph Brady, Daniel Curley, Michael Fagan, Thomas Caffrey and Timothy Kelly. Their executions took place in Dublin, in the months of May and June 1883.

But Carey was a hunted man as his old revolutionary companions sought out his whereabouts.‭ It became known that the British had sent him to South Africa with his family to start a new life in a remote location. But his attempt to escape the rightful vengeance of the remnants of those Invincibles still at large proved a futile exercise.

Nemesis was on his track in the person of Patrick O'Donnell,‭ a fellow-passenger on board the Melrose. An acquaintance sprang up between the two men; and O'Donnell, from the descriptions he had heard of Carey's personal appearance, was not slow in recognizing in his compangon de voyage, the notorious informer; and his sensibilities were shocked by the discovery that he had given the hand of friendship to such a wretch.

An altercation between these men on Sunday,‭ July 29, 1883, resulted (according to O'Donnell's statement) in Carey drawing his revolver on O'Donnell, whereupon O'Donnell--as he claims in self-defense--fired his own revolver twice at Carey, with fatal effect. O'Donnell was immediately placed under arrest, and on the arrival of the Melrose at Port Elizabeth, was taken before a magistrate, who recommitted him for trial in England, as the shooting had taken place on the high seas. The doom of O'Donnell, tried before an English judge and jury, was a foregone conclusion, and though he had the advantage of the most able counsel that money could procure, and there was no lack of funds for his defense--the Irish World alone having raised upward of fifty-five thousand dollars for this purpose--his conviction was secured.