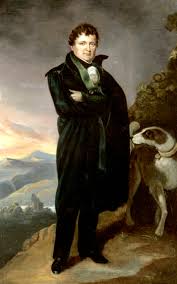 5‭ July 1828: Daniel O’Connell won the Parliamentary seat of County Clare in a bye –election. His Victory marked a triumph for his organisation the Catholic Association. O’Connell became the first Catholic to be returned for a Constituency since the 1690’s. This campaign was the culmination of a series of electoral contests conducted by the Association and threw down the gauntlet to the British Government to either remove the Laws barring Catholics from the Parliament in London or possibly face a Revolution in Ireland.

O’Connell had decided some months before to put his name forward at the first available opportunity.‭ Instead of using surrogate candidates of Protestant background who were sympathetic to Catholic Emancipation he wanted to have himself elected in a direct challenge to the Penal Laws against Catholics. The current MP for Clare, William Vesey-Fitzgerald, had to stand for re-election because he had been appointed as President of the Board of Trade, which carried a salary.

Some days previously O’Connell had addressed the electors of Clare:

The oath at present required by law is‭—‘That the sacrifice of the Mass and the Invocation of the blessed Virgin Mary and other Saints, as now practiced in the Church of Rome, arc impious and idolatrous’. Of course I never will stain my soul with such an oath; I leave that to my honourable opponent, Mr Vesey-Fitzgerald. He has often taken that horrible oath…

Ironically‭ Vesey-Fitzgerald claimed he was a moderate who supported a relaxation of the Penal Laws. In the event O’Connell won handsomely by 2,057 votes to 982. This triggered a serious political crisis because as an elected representative of the People he was barred from taking his seat- solely on account of his Religion.

The defeated candidate was none too happy with the result,‭ ‬writing to the Lord Lieutenant the Marquis Anglesey that very night:

The priests have triumphed,‭ and through them and their brethren, the Catholic parliament will dictate the representatives of every county in the south of Ireland…The poll closed tonight.‭ ‬It was hopeless from the first day…What a convulsion for any man to throw the county into, to satisfy his own vanity and to obtain what he cannot use…

The following year Catholic Emancipation was reluctantly passed through both Houses of the British Parliament and this Constitutional climb down opened the door for other Catholic politicians to follow in O’Connell’s footsteps.‭ For his efforts in leading the campaign to emancipate his fellow co-religionists from the odious Anti Catholic Penal Laws Daniel O’Connell was subsequently known as ‘The Liberator’.