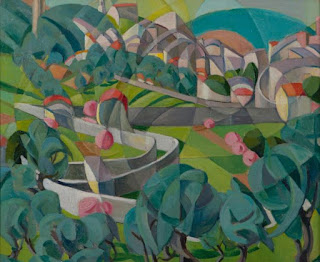 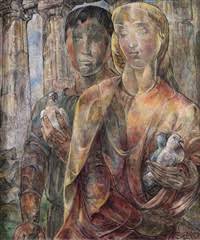 7 July 1978: The death of Mary Swanzy on this day. An artist of some merit she never received great recognition for her considerable number of paintings that spanned decades both here and abroad. She was born in Dublin in 1882.  ''Her parents, Sir Henry Rosborough Swanzy, an ophthalmic surgeon who played a central role in establishing the Royal Victoria Eye and Ear Hospital; and Mary (nee Denham), were, as Julian Campbell put it in his 1986 study of the painter, “of the professional Protestant classes who were so influential in that generation''.

She seems to have had a perfectly normal though somewhat straitlaced upbringing, traits that continued into adult life. She basically kept herself to herself and dedicated her energies to her work as an artist. Competent rather than brilliant she nevertheless produced quite a range of paintings that covered many different styles.

With the death of her parents she became financially independent after the Great War. With political turmoil in Ireland and the involvement of a 2nd cousin in a notorious incident she set off to travel the World, visiting the South Sea islands amongst other places. She only came back to live in Dublin in the Second World War presumably to avoid the bombing of London where she usually lived. In 1943, she held a one-woman show at the Dublin Painters' Gallery, and she was also featured at the first Irish Exhibition of Living Art. She was exhibited at St George's Gallery, London in 1946.

Swanzy was made an honorary member of the RHA in 1949,[1] showing with them in 1950 and 1951. She did not exhibit in Ireland for a number of years, but the Hugh Lane Gallery held a major retrospective of her work in 1968. Following this she held two one woman shows at the Dawson Gallery in 1974 and 1976. In 1975 she was featured at the Cork ROSC and resumed showing with the RHA. She continued to paint until her death at her home in London on 7 July 1978.