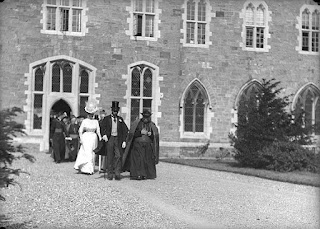 9‭ July 1911: King George V and Queen Mary visited the Catholic Seminary of Maynooth on this day. The British king was on a brief tour of Ireland to mark his accession to the throne. He spent four days in and around Dublin on a royal visit to the city. The King and the royal party, led by the 8th Royal Hussars on horseback, had travelled from the harbour in Kingstown/ Dún Laoghaire to Dublin Castle, as thousands lined the streets to view his procession. Here the King and Queen based themselves in a very secure location and circulated from there to the various locations in a meticulously  planned series of events designed to enhance Royal Power in the wake of George V’s Coronation.
It was decided that a visit to the educational centre of Catholic Ireland would help to balance any attempt of the Orange Order to make his stay here the preserve of any one side.‭ The King was accompanied by his formidable wife Queen Mary of Teck [Germany] who was bedecked in a stunning white dress with a matching hat of feathers. Cardinal Michael Logue, Archbishop of Armagh and Primate of All Ireland and Dr Daniel Mannix the President of the College, greeted the Royal couple on arrival. Other senior members of the Catholic Hierarchy were also in attendance. The visit was the highlight of the King’s stay in Ireland.
However King George’s visit by no means met with everyone’s approval.‭ Even someone as socially conservative as William Martin Murphy turned down the offer of a Knighthood from the King. Dublin Corporation would not issue an address welcoming him to the City of Dublin. James Connolly warned people to stay away and issued a stern rebuttal of the majesty of kings and this one in particular:
Murder,‭ treachery, adultery, incest, theft, perjury – every crime known to man has been committed by some one or other of the race of monarchs from whom King George is proud to trace his descent. '‬His blood has crept through scoundrels since the flood.'
Ours be the task to enlighten the ignorant among our class,‭ to dissipate and destroy the political and social superstitions of the enslaved masses and to hasten the coming day when, in the words of Joseph Brenan, the fearless patriot of '48, all the world will maintain:
‭'The Right Divine of Labour
To be first of earthly things‭;
That the Thinker and the Worker
Are Manhood's only Kings.‭'‬
King George though seems to have enjoyed his stay.‭ ‬On 12 July from Dublin Castle he issued a 'Letter of Thanks' for the reception he and his children had received. It ended with the following passage:
Looking forward,‭ as we do, to coming amongst our Irish people again, and at no distant date, and repeating in other parts of the Country the delightful experience of the last few days, we can now only say that our best wishes will ever be for the increased prosperity of your ancient capital, and for the contentment and happiness of our Irish People.‬
King George though was to be somewhat disappointed - as he never again set foot in the Fair City. It was to be 100 years before another British Monarch did so.
Posted by Columba Iona at 04:40