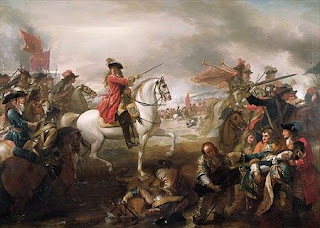 12 July [O.S. 1 July] 1690: The Battle of the Boyne/Cath na Bóinne was fought on this day. The Protestant Army of King William of Orange defeated the Catholic Army of King James II. With around 36,000 Williamites against 25,000 Jacobites this battle, in terms of the numbers of men on the battlefield was the largest clash of arms ever fought in Ireland.
Both kings commanded their armies in person assisted by a number of men of high rank and status. King William had under his orders English, Scottish, Dutch, Danish, French Huguenots and Protestants from Ireland. King James Army mainly consisted of Catholic Irishmen, and a scattering of Englishmen loyal to the Stuarts. The King was also backed by around 6,500 regular French troops sent by King Louis XIV. William sent 10,000 men towards Slane with the advance guard under Count Meinhard, which drew the bulk of the Jacobites upstream in response. With some 1,300 Jacobites posted in downstream in Drogheda, only 6,000 were left at Oldbridge to confront 26,000 Williamites. Duke Frederick Marshal Schomberg (William’s top General) then led the Dutch Blue Guards and other regiments into the waters of the Boyne and across to the other side.
Opposing them were just seven regiments of the Catholics who shot their attackers down in great numbers as they attempted the passage of the Boyne at Oldbridge. A want of sufficient cavalry and artillery to block the crossing of so formidable a host eventually told against the Irishmen. They were pushed back from the riverbank as their enemies gained a toehold and then flowed across. William himself eventually crossed at Drybridge slightly downstream with about 3,500 mounted troops.
Marshal Schomberg brought down to the ford of Ouldbridge the gross of his cavalry, with orders to push on and suffer no check. At this, the seven regiments aforesaid of Irish foot, observing they would be soon overpowered, they cried to their own for horse to sustain them. In the meanwhile, they made a smart fire at the enemies, and laid them in heaps, as they were entering the waters. But their crying for horse was in vain; for they received but one troop, which was as good as nothing.
By the time reinforcements arrived it was too late and the enemy was across in strength. The seven regiments of Irish foot, which guarded the great ford of Ouldbridge, not being supported by horse, were also forced to retreat, but were in danger to be intercepted by such of the enemy as had traversed first the river before they joined their main army, which the duke of Tyrconnell, from the right, perceiving, flew with his regiment of horse to their rescue, as did the duke of Berwick with the two troops of guards, as did colonel Parker with his regiment of horse, and colonel Sutherland with his. It was Tyrconnell's fortune to charge first the blue regiment of foot-guards to the prince of Orange, and he pierced through.
Further upstream Count Meinhard had by then crossed the Boyne by the ford at Rosnaree and though blocked by O’Neills cavalry regiment he was soon reinforced. With King James flank now turned his position was a precarious one. Most of his army was at this critical moment of the battle betwixt and between these two vital points and unable to render assistance to either in enough strength to turn the days events.
The King himself with a considerable portion of his Irish and French troops did however block Lord Douglas in the Williamite service from crossing the Boyne at Donore - which is situated between the fords of Rosnaree and Oldbridge. But this was a stalemate while the outcome of the battle was decided to the left and the right of the King’s position at Donore.
Eventually the Williamites across the river in strength on both the left and right flanks the order was given to fall back on Duleek to the south and stop that village been taken by the enemy. If King Williams’s men had taken the vital bridge there then the whole of the Jacobite army would have been cut off from retreat and in all likelihood captured in its entirety.
As it turned out the retreat was carried out in good order and despite further clashes Lord Tyrconnel, given command of the rear-guard, was able to effect an orderly withdrawal. The enemy were content to follow in their footsteps and not risk a reverse.
However in these follow up operations the Williamites lost their best military leader – Marshal Schomberg.
Twas during these encounters that one master Bryen O'Tool, of the guards, discovering his former acquaintance, marshal Schomberg, near the village of Ouldbridge, resolved to sacrifice his life to the making him away, upon which he, with a few of the guards, and a few of Tyrconnell's horse, made up to him, and O'Tool with his pistol shot the marshal dead. But, soon after, fighting like a lion, he was slain.
King James's army retreated across the river Nanny at Duleek and evaded capture. It had been a ‘close run thing’ and though the battle had been lost the Army was intact and still a cohesive fighting force.
Bad tactics rather than bad fighting had cost King James and his Irish followers the chance of victory against a more numerous enemy. The line of the Boyne might well have been held but King James had been outmanoeuvred by Marshal Schomberg’s plan - even though this crusty old Huguenot did not live to savour the Victory he had so materially helped to achieve.
Though there was some hot fighting in the course of the battle overall the casualties were light on both sides with perhaps 1,500 soldiers lying dead along the banks of the Boyne. Considering the strategic consequences of this clash of arms it was a very low number for a battle that determined the political and religious balance of power in Ireland for centuries to come and that still resonates down to our own day.
Posted by Columba Iona at 05:26