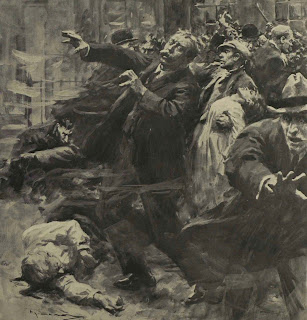 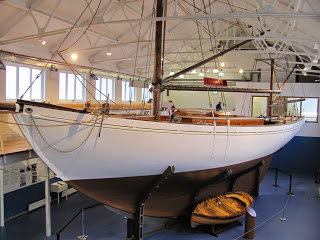 26‭ July 1914: Erskine Childers landed 900 Rifles and 29,000 rounds of ammunition at Howth from the yacht Asgard on this day. He was helped by his wife Molly Childers and Mary Spring Rice. Further to the south another 2,000 rifles and more ammunition were landed at Kilcoole, County Wicklow.

Dublin Castle made strenuous efforts to block the distribution of these weapons but the cargo was eventually spirited away by Irish Volunteers after evading the Constables of the DMP.‭ Over a thousand members of the Irish Volunteers later paraded down O’Connell St in Dublin’s City Centre in defiance of the orders issued by the DMP. A clash seemed likely between the two sides but none took place.

But later that evening British troops from the Kings Own Scottish Borderers‭ (‬KOSB) were drawn up across the narrow thoroughfare of Bachelors Walk in Dublin’s City Centre. A confrontation ensued between the soldiers and local people. What happened after that is a matter of some dispute. The British Military claimed their men were the subject of stones being thrown. Other observers claimed that the soldiers opened fire without warning. Three people, including a woman, were shot dead and almost 40 were wounded. A man died later in hospital and two of those injured were bayoneted as well.

Some days later John Redmond MP and the Leader of the Irish Nationalist Party rose in the British House of Commons to give his considered response to this Massacre.

Let the House clearly understand that four fifths of the Irish People will not submit any longer to be bullied,‭ or punished, or shot, for conduct which is permitted to go scot free in the open light of day in every County in Ulster by other sections of their fellow Countrymen.

The situation in Ireland was at a Crises point and daily an outbreak of fighting was expected between those who supported Home Rule and those who were opposed to it.‭ Throughout Britain and Ireland Politicians and People expected Ireland to descend into Civil War.

But two days after the events at Bachelors Walk the Austro‭ - Hungarian Empire issued a Declaration of War upon Serbia and within a week the Bosnian Crises had sucked the Continent into a World War. The affairs of Ireland were relegated to the back pages and Irish History took a new and entirely unexpected turn.

Today this famous ship that help change the course of Irish History is housed in a fully restored state in the National History Museum on Benburb St Dublin.