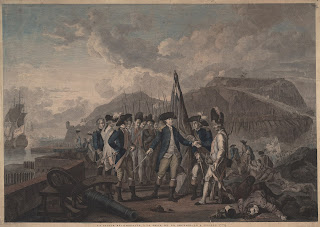 2 July 1779: The Irish Brigade in the service of France landed on the Caribbean island of Grenada on this day. They were part of an expeditionary force of some 2,300 men tasked with seizing the island from the British garrison based there. France and Britain were at War over the status of the United States, with the French backing the attempts of the Americans to secure their Independence from Britain.
Colonel Arthur Dillon led the Irish soldiers and the overall command of the Expedition rested with Admiral Compte d’Estaing. As it so happened another Irishman, Lord McCartney, was in charge of the British troops on the island. He had only a small force of about 500 men to resist these invaders and decided to withdraw to the heights of the position known as the Morne de l'Hopital and try to hold out there. Though outnumbered his position was strong and with luck he might have repulsed the assault until help arrived. Besides the steep incline, there were several walls on the hillside placed to impede the progress of any attacker. Dillon was sent ahead with a small force to ascertain whether an assault was possible and concluded that it was.
As dusk fell on the 3rd the French launched a daring three-pronged assault with the Irish Brigade on the centre left. As a mark of honour they were accompanied by d’Estaing himself. Despite the obstacles in their way, the French and Irish troops fought their way up the slope and had taken the position by morning, forcing McCartney’s surrender. Several officers of Dillon's regiment were among the 100 casualties sustained by the attackers. Both the British and the French coveted this strategic Caribbean island and within days a British Relief Expedition arrived off its shores to engage the French Navy. They were beaten off and the island remained in French hands until 1783 when it was handed back to Britain on the conclusion of hostilities.
Posted by Columba Iona at 05:15