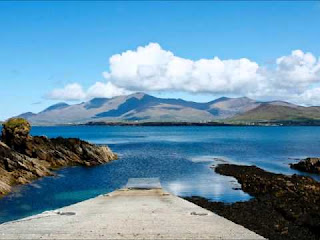 17 July 1579: James Fitzmaurice Fitzgerald, the cousin of the 15th Earl of Desmond arrived off Smerwick/ Ard na Caithne in County Kerry on this day. The Catholic adventurer had arrived back from Spain with high hopes of re launching the Catholic Cause in Ireland and in particular in Munster. He brought with him one Nicholas Sanders - an exiled priest and holding the position of Papal Nuncio to the Irish. Within days a few hundred men joined them in two Spanish galleys but this small force was only enough to garrison a little fort. Fitzmaurice knew that he would have to raise the flag of revolt and rely on the resentment of the Catholics of Munster against English Protestant encroachments to carry the day.

However many of the local chieftains had reached an uneasy peace with the English and did not want to risk all they had in a revolt in which the odds would be stacked against them. One such was Fitzmaurice’s own cousin Theobald Burke. Within days of the landing Fitzmaurice departed on a series of raids but his depredations turned many against him including his own cousin!

Mac-I-Brien sent a body of galloglasses and soldiers to Theobald. These then went in pursuit of those heroic bands, and overtook James, who had halted in a dense and solitary wood to await their approach. A battle was fought between both forces, in which James was shot with a ball in the hollow of the chest, which afterwards caused his death. Notwithstanding this, however, he defeated his lordly pursuers. In this conflict a lamentable death took place, namely, that of Theobald Burke, a young warrior, who was a worthy heir to an earldom for his valour and military skill, and his knowledge of the English language and the law. James, the son of Maurice, had not passed far from the scene of this battle when the languor of death came over him; upon which, in a few words, he made his will, and ordered his trusty friends to cut off his head after his death, in order that his enemies might not discover him, so as to recognise or mangle him.

ANNALS OF THE FOUR MASTERS

The killing of James Fitzmaurice Fitzgerald should have been the end of the matter. But while his return home to Ireland was cut short by his death in battle his actions had been enough to trigger off what became known as the 2nd Desmond War that proved to be a long and bloody affair.