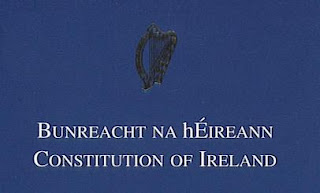 1 July 1937: A General Election was held in the Irish Free State on this day. There was also a Plebiscite at which a new Irish Constitution (Bunreacht na hÉireann)was put to the people for approval.

This was Eamon De Valera’s first test at the polls in a General Election since 1933 and he hoped to do well. But he faced a reinvigorated opposition as the Fine Gael under W.T. Cosgrave emerged from the ashes of the old right wing Parties. The Labour Party was not such a threat but to keep it off his back he ‘stole their thunder’ on many occasions in order to deflect any progress it might hope to make at Fianna Fáil’s expense.

In addition the IRA were still active and while most of the Republicans of the 1920s had gone with him there was still a significant number who withheld their support. Dev hoped that his new Constitution would lay a template upon which a Republic could be founded in due course and that embedded within its articles a reflection of the socially acceptable norms of those times.

The Election was held on revised electoral boundaries that saw the number of TDs returned reduced from 153 to 138. While De Valera called the General Election of his own volition he had to go to the polls within another six months anyway and he reckoned that picking a time of his own choosing was better than been forced to go when unforeseen events might work against him.

In the event the results were something of a disappointment for the Soldiers of Destiny. FF won 69 seats, exactly half the total and thus short of a majority. Fine Gael returned 48 members to the House and the Labour Party under William Norton saw 13 of its candidates elected. Eight Independents also won seats.  The popular vote was down and it would seem FF were the big losers in this. The Labour Party almost doubled its popular vote and won 5 extra seats. Even still there was no Coalition with FF with Dev opting for an unofficial arrangement that allowed him to form a Government with Labour support. Within a year he called another Election to try and gain an overall majority.