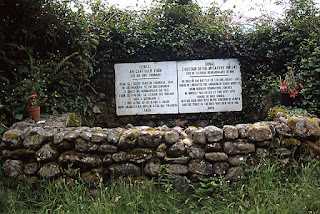 27‭ ‬July 1261: The Battle of Callan was fought on this day. The battle site is located a few miles from Kenmare County Kerry, near where the Roughty and Slaheny Rivers converge and close by the castle of Ardtully. Callan is near Kilgarvan in the barony of Glanarought, Co. Kerry.

It came about as a result of an attempt by the Anglo-Norman Fitzgeralds‭ (‬supported by the Barrys) to wrest control of territory from the Gaelic McCarthy’s of Kerry. But the expedition met with disaster and was sorely defeated by the Irish. The head of the McCarthy’s, Finghin MacCarthaigh, selected a battleground suited to the fighting tactics of his men. They were mostly lightly armed but mobile troops who used correctly could be very effective against the better armoured but slower moving soldiers and Knights of the Colony.

The leading men of these invaders were the Fitzgerald’s of Munster,‭ led by John fitz Thomas and his son, Maurice fitz John. Another of the Norman leaders was 'the son of Richard’ probably Walter de Burgo, Lord of Connacht and later Earl of Ulster. The Colonists were also supported by a few would be hopefuls from amongst the Irish themselves led by one Domhnall Ruadh -  a claimant to the McCarthy Lands.

In the event when battle was joined John Fitzthomas FitzGerald and his son Maurice were killed together with fifteen knights and more than‭ ‬300 men. The survivors fled and Finghin MacCarthaigh was able to sweep all before him. But he overextended his reach and was in turn defeated and killed only a short while later.

1261.4‭ A great war was waged, and numerous injuries were committed, by Finghin, son of Domhnall Mac Carthaigh, and his brothers, against Foreigners in this year.

1261.5‭ A great hosting by the Clann-Gerald into Des-Mumha, to attack Mac Carthaigh; and Mac Carthaigh attacked them, and defeated them, and Fitz-Thomas (John proprium nomen), and his son, and fifteen knights and eight noble barons along with them, were slain there, besides several young men, and soldiers innumerable. And the Barrach Mór was also killed there. Finghin Mac Carthaigh was subsequently slain by the Foreigners, and the sovereignty of Des-Mumha was assumed after him by his brother, i.e. the Aithchleirech Mac Carthaigh.

Ironically after many vicissitudes of Fortune it was Domhnall‭ Ruadh, - the would be claimant who fought alongside the men of the Colony on the day - who was the one who emerged as the chief beneficiary of these wars.

'After the deaths of Finghin Reanna Ró and Cormac na Mangartan,‭ ‬he seems to have assumed and held the kingship of Desmond until his death in 1302--he reigned 40 years, according to A.I.--though not without opposition.'

The Battle of Callan‭ By Diarmuid Ó Murchadha in 'Journal of the Cork Historical and Archaeological Society 1961'.

As a result of the deaths of John fitz Thomas and his son,‭ Maurice fitz John, the power of the Geraldines was curtailed and the MacCarthys ruled on in their own lands for another 300 years. The Battle of Callan was thus one of the most decisive clashes of arms in the History of Ireland.