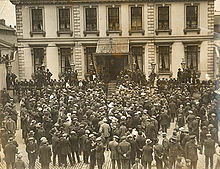 11‭ July 1921: ‘The Truce’ began at 12 noon on this day. This brought to an end organised military operations between the Irish Republican Army and the British Crown Forces during the Irish War of Independence. The negotiations leading up to the cessation of hostilities had been concluded some days previously at the Mansion House [above] in Dublin between representatives of the Irish President Eamon de Valera and the British Prime Minister Lloyd George. The British CIC in Ireland General Macready assented that his troops would obey what orders they were given from London.

‭On July 8th at the close of discussions at the Mansion House, de Valera telegraphed to to Lloyd George that he was ready to meet and discuss with him ‘on what basis such a conference as that proposed can reasonably hope to achieve the object desired’. Lloyd George telegraphed that he would be happy to see de Valera, and any colleagues he would wish to bring with him, at Downing Street. De Valera replied that he would be in London on the following Thursday, July 14th.

‭General Macready was now invited to the Mansion House ; the general principles governing the Truce was agreed upon and liaison officers were appointed to conduct discussions between the two armies on matters of detail, Robert Barton and Eammon Duggan for the IRA, and truce terms were discussed. ...It was not until 3pm on the 9th that terms were finally agreed to.

The terms agreed were that no British reinforcements would enter Ireland,‭ raids and arrests would cease and secret operations end. The Irish in turn agreed to cease attacking the British, not to interfere with private or British owned property and not to disturb the peace that would necessitate military interference. Both sides agreed not to engage in provocative displays of their respective forces, armed or unarmed.

The following day an Irish Delegation consisting of Eamon de Valera,‭ Arthur Griffith, Austin Stack and Robert Barton departed for London to open negotiations with the British Government. The Lord Mayor of Dublin ‬Laurence O'Neill,‭ Count Plunkett and Erskine Childers also accompanied the delegation. It looked like the violence that had wracked Ireland for the last two and a half years was coming to an end.

‭Notwithstanding that it was the last days of the War of Independence there were still quite a number of violent incidents that led to the deaths of at some 60 individuals as the hours counted down to the  ceasefire including 10 who died violently on the day of the Truce itself. ‬But while an uneasy Peace settled down upon most of the Country it was a different story in the North, particularly in the city of Belfast. It had always been a volatile place in July – owing to the parades of the Orange Order on 12th July – but this was violence intensified and militarised on a scale not seen before. There sectarian clashes resulted in an orgy of murders, burnings and intimidation with the Police & Military openly taking sides against the Nationalist population.

The 11th fell on a Monday that year, and the previous day became known as Belfast's 'Bloody Sunday'. That day 16 people were killed violently, 1 RIC man, 10 Catholic and 5 Protestant civilians. By the end of the week, 23 people had been killed in Belfast, hundreds more wounded, two hundred homes destroyed and a thousand people made homeless.