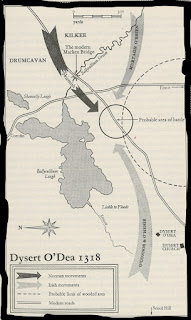 De Clare made the mistake of dividing his army in three in the face of the enemy and he led the van towards Castle Dysert O’Dea‭ – the home of the Irish Chieftain. O’Dea held them at the ford of Fergus and sent messengers out to bring up reinforcements as De Clare charged at his opponents only to be surrounded and cut down by the axe of Conor O’Dea himself.

As the rest of the Anglo Norman force came up they waded into the Irish and were on the point of extracting a bloody revenge when‭ Felim O'Connor's troops charged down the hill of Scamhall (Scool) and cut a path through the English to join the battle. De Clare's son then arrived on the scene and was cut down and killed by Felim O'Connor.