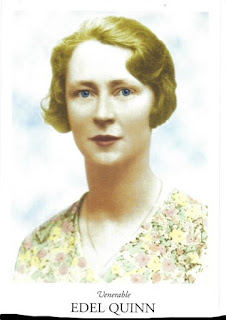 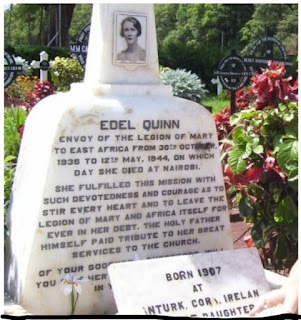 12 May 1944: The death of the Venerable Edel Quinn on this day. She died of a heart attack in Nairobi Kenya after dedicated service to the Legion of Mary in Africa. She was born 14 September 1907 in Kanturk Co Cork where her father worked in a local bank. She was called  "Edelweiss - after the flower". The family moved a number of times as he was promoted to other branches but he was eventually posted to Dublin and they lived in the suburb of Monkstown. When she was 16 she was sent to finishing school in England where she completed her studies. On return to Dublin she did a secretarial course and found jobs in the city centre.

‘For some years she was the main support of the family; she also personally arranged for her siblings’ schooling. A keen athlete, Quinn entered fully into the social life of tennis events, dances, and theatre while running a girls’ club in the inner city.’

She was a lively girl who went dancing & socialising but her heart was set on entering a Convent. She joined the Legion of Mary in 1929 and was appointed by its Founder Frank Duff to work with Dublin’s prostitutes and later with nurses in the City. However in 1931 she started to hemorrhage and she was referred to the Newcastle sanatorium with TB, where she remained from 5 February 1932 till shortly before Christmas 1932. Though one lung was not healed, she considered herself healthy, and for the remainder of her life she took precautions to separate her living quarters and her human contact from others lest she infect them.

Frank Duff sent her to Wales to help with the Legion there and she did well. On return he had an even bigger task for her - Africa! On 30 October 1936 she boarded the Llangibby Castle at Tilbury docks, London, arriving in Mombasa on 23 November. She found herself doing a lot of travel in East Africa where she proved herself a trainer of leaders, and a tactful link between priests and people. She worked among the African peoples in Kenya, Tanganyika (Tanzania), Uganda, and Nyasaland (Malawi), travelling vast distances by local transport. She established the official headquarters of her envoyship in Nairobi, conscious that the catholic missionary movement in East Africa was a developing one. She died from a heart attack on 12 May 1944 in the thirty-seventh year of her life.

In 1994 Edel Quinn was declared Venerable by Pope John Paul II and thus on the path to Sainthood.