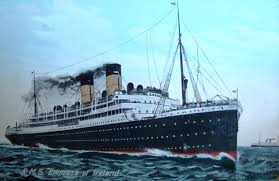 29 May 1914: The loss of the passenger liner Empress of Ireland on this day. The ship sank within minutes of being involved in a collision with a Norwegian SS Storstad in the St Lawrence river, Canada. The vessel had only left port in Quebec a few hours previously, but it was under a new Captain and sailed into a bank of fog where after spotting the approaching Storstad it tried to avoid contact but was unable to do so. Both skippers blamed the other but a subsequent Court of Inquiry blamed the Norwegian for the impact. A verdict that the Norwegians never accepted.

Of the 1,477 persons on board the ship, 1,012 (840 passengers, 172 crew) died. The number of those who were killed is the largest of any Canadian maritime accident in peacetime.

Empress of Ireland was built by at Govan on the Clyde in Scotland and was launched in 1906.The liner had just begun her 96th sailing when she sank.

There were only 465 survivors, 4 of whom were children (the other 134 children were lost) and 41 of whom were women (the other 269 women were lost). The fact that most passengers were asleep at the time of the sinking (most not even awakened by the collision) also contributed to the loss of life when they were drowned in their cabins, most of them from the starboard side where the collision happened.

One of the survivors was Captain Kendall, who was on the bridge at the time, and quickly ordered the lifeboats to be launched. When Empress of Ireland lurched onto her side, he was thrown from the bridge into the water, and was taken down with her as she began to go under. Swimming to the surface, he clung to a wooden grate long enough for crew members aboard a nearby lifeboat to row over and pull him in. Immediately, he took command of the small boat, and began rescue operations.

The lifeboat's crew successfully pulled in many people from the water, and when the boat was full, Kendall ordered the crew to row to the lights of the mysterious vessel that had rammed them, so that the survivors could be dropped off. Kendall and the crew made a few more trips between the nearby Storstad and the wreckage to search for more survivors. After an hour or two, Kendall gave up, since any survivors who were still in the water would have either succumbed to the freezing cold or had drowned by then.

While the ship had an Irish name there was no specific Irish connection other than she was based in Liverpool and sailed weekly back and forth across the Atlantic. However outside of Ireland it was the case that Liverpool was the most ‘Irish’ city on Earth, and at that time one, if not the greatest Shipping Port in the World. Many of the crew would undoubtedly have had Irish links.

Sadly this terrible disaster has been almost forgotten, wedged as it is between the far more well know maritime disasters of the Titanic [1912] and the Lusitania [1915] which resonated with the public mind down the years.

The wreck lies in 40 metres (130 ft) of water, making it accessible to divers. Many artifacts from the wreckage have been retrieved. Some are on display in the Empress of Ireland Pavilion at the Site historique maritime de la Pointe-au-Père in Rimouski, Quebec. The Canadian government has passed legislation to protect the site. http://en.wikipedia.org/wiki/RMS_Empress_of_Ireland#Passengers_and_crew