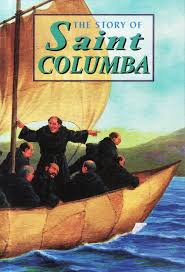 Columba was in his forty-fourth year when he departed from Ireland. He and his twelve companions crossed the sea in a currach of wickerwork covered with hides. They landed at Iona on the eve of Pentecost, 12 May, 563. The island, according to Irish authorities, was granted to the monastic colonists by King Conall of Dalriada, Columba's kinsman. ... It was a convenient situation, being midway between his countrymen along the western coast and the Picts of Caledonia.

He and his brethren proceeded at once to erect their humble dwellings, consisting of a church, refectory, and cells, constructed of wattles and rough planks.

After spending some years among the Scots of Dalriada, Columba began the great work of his life, the conversion of the Northern Picts.

But mystery surrounds why exactly did Saint Columba, a powerful and influential man in Ireland, depart the land of his birth for such a bleak and remote spot far from any place of influence in this World. Columba was like many other Irishmen of the Faith motivated by a desire to convert as many Pagans to Christianity as he could in order to save their souls from Damnation. But what exactly was the catalyst that pushed him over the edge to leave here? The idea of pilgrimage, or peregrinatio, which was central to Irish monks and to Columba, involved a permanent sense of exile, renunciation and searching for one's own place of resurrection; one's desert. But it did not necessarily mean a complete separation from the World, rather as search to find a place where solitude and reflection were needed they were readily at hand.

The Battle of Cúil Dreimne 560/561 AD was considered in later years to be the event that triggered Columba's peregrinatio.

Saint Columba, also known as Colum Cille, is the greatest of the Irish saints. His involvement is considered central to the subsequent story of this battle. It is probably the only one in Irish History in which the copyright to a book was remembered as one of the reasons for a battle! However that was not the only factor involved and indeed it is only fair to mention that whether the dispute over a copy write was one of the real reasons cannot be traced to a contemporary written source. We know that historically Columba fell foul of the Church authorities in the wake of this battle and the copy write story became accepted in later times as the reason for his subsequent exile.

The High King at the time was Diarmait Mac Cerbhall ,a descendant of the great Niall of the Nine Hostages. Saint Columba was himself of the Uí Néills of Cenel Conal and thus of Royal blood. However he was also a man of ambition and drive. He made the mistake of copying a holy book belonging to another saint and was caught red handed. He appealed to the High King for judgement, possibly hoping that familial ties, however distant, would swing things in his favour. The King decided otherwise and in a famous judgement declared that: to every cow its calf and to every book its copy.

Much incensed Columba returned home to the North and raised the issue with his immediate kinsmen, of Royal blood themselves, against the High King. They brought the King of Connacht into their alliance, who seems to have become involved due to the treacherous death of his own son by King Diarmait, despite being under the protection of Saint Columba. He also owed his position as King of Connacht to the northern Uí Néills, who had helped him win the throne in 550 AD at the battle of Cuil Conaire.

No doubt land and power played a huge part in all this too that we are unable to trace in an exact path in the historical accounts. It is probable though that the northern Uí Néills viewed Diarmaid of the southern Ui Neills with some suspicion. He was certainly a character who was hard-hitting and ruthless and who brooked no opposition. He in turn felt that by siding with St. Columba in this dispute the northern Uí Néills were interfering in his affairs.

This great and important battle of Cúil Dreimne was fought at the foot of Ben Bulben, just above the Columban Church of Drumcliff in County Sligo. From the location it looks like it was Diarmait who initiated the Campaign by marching north to meet his enemies in battle. He probably wished to place himself between his opponents in Connacht and Ulster and defeat them in turn. While a good strategy his plan of campaign backfired and the High King was soundly defeated with a great loss of life to both sides. It is recorded that 3,000 men fell that day. As it turned out neither the northern Uí Néills nor the king of Connacht followed up their success, and Diarmait lived to fight another day. However the defeat of Diarmait was to have far reaching consequences that were not readily apparent at the time.

Columba was full of remorse afterwards. He was too good a man not to realise the enormity of what he had unleashed, however unwittingly. The Church too was less than impressed with his involvement in all this. He had foolishly allowed his personal pride to be used as a catalyst for War between the various branches of the Ui Neills, his own kinsmen. This in turned had pulled in the kingdom of Connacht so that three of Ireland’s five ancient provinces were involved in a bloody encounter that he had played a large part in starting. As a result of the battle of Cúil Dreimne St. Columba was banished from Ireland by his peers in the Church and made to swear he would never put his feet on the ground here again. Thus in the year 563 AD he made his momentous decision to sail for the island of Iona off the west coast of Scotland. From here his missionaries and their successors were one day to spread the word of the Gospel to the heathen Picts and the Pagan English of Northumberland.

They landed at the little island of Iona off the east coast of Scotland on the eve of the Feast of Pentecost. The island, according to Irish sources, was probably granted to the monastic colonists by King Conall of Dalriada, Columba's kinsman. It was a convenient situation, being midway between his countrymen along the north western coast of Ireland and the Picts of Caledonia. He and his brethren proceeded at once to erect their dwellings, consisting of a church, refectory, and cells, constructed of wattles and rough hewn wood.

However not only was Saint Columba to have great influence on the development of Christianity in Scotland but it is believed that it was here and in this year that the first Annals of contemporary events back home in Ireland were recorded on a regular basis.